"Greetings, recruit! When Ward trapped Fitz and Simmons at the bottom of the ocean, they had to rely on their scientific knowledge to escape. In this challenge you'll use your brains and your muscle to rescue Fitz."
―Elizabeth Henstridge[src]

Sci-Tech Challenge is the second episode of the web series Agents of S.H.I.E.L.D.: Academy.

Can this agent crack the code and rescue Fitz?

Noelle Mabry enters a room with a swimming pool, where Elizabeth Henstridge appears on a monitor. Henstridge reminds Mabry that when Grant Ward trapped Leo Fitz and Jemma Simmons at the bottom of the ocean, they had to rely on their scientific knowledge to escape. She then presents Mabry with a challenge in which she must use her brains and her muscle to rescue a drowning man in a T-shirt marked "Science, biatch!".

Mabry must answer several mental challenges to unlock numeric codes to save the man, who is handcuffed to a briefcase and has a limited supply of oxygen:

With the code unlocked as 8-0-4, Mabry dives into the pool to rescue the man. However, the code turns out to be false, to the shock and confusion of Mabry and Henstridge. Brett Dalton appears on the monitor and reveals that the code is invalid and that only a true Agents of S.H.I.E.L.D. fan would know the combination. Henstridge encourages Mabry to try a different order, and she succeeds by entering 0-8-4. Henstridge congratulates her and informs her that she has won the part of an agent on Agents of S.H.I.E.L.D., much to Mabry's delight. 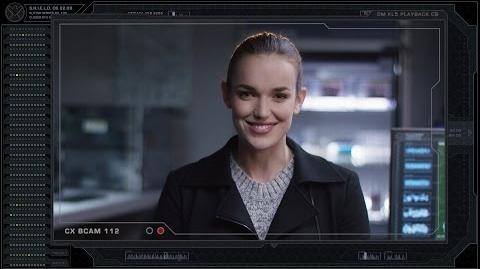 Marvel’s Agents of S.H.I.E.L.D. Academy – Sci-Tech Challenge
Add a photo to this gallery

Retrieved from "https://marvelcinematicuniverse.fandom.com/wiki/Sci-Tech_Challenge?oldid=951504"
Community content is available under CC-BY-SA unless otherwise noted.