"STRIKE, you heard the Cap! Gear up!"
―Brock Rumlow[src]

STRIKE (Special Tactical Reserve for International Key Emergencies) is a counter-terrorist Special Mission Unit of S.H.I.E.L.D.. Originally led by Brock Rumlow during Nick Fury's directorship, the unit included several of S.H.I.E.L.D.'s best agents. However, at the same time most members of the team were actually undercover HYDRA operatives whose true allegiance was revealed during the HYDRA Uprising which led to the disbandment of the team.

Additionally, there was a separate unit, codenamed STRIKE Team: Delta, which consisted of specialist S.H.I.E.L.D. agents Clint Barton and Natasha Romanoff. The two were the exception to being secretly HYDRA, but the unit was disbanded when they became members of the Avengers before the fall of S.H.I.E.L.D..

STRIKE was reformed a few years later during the directorship of Jeffrey Mace, this time led by Melinda May. Following the assassination attempt on Glenn Talbot by the Life-Model Decoys, S.H.I.E.L.D., and STRIKE with it, were shut down, only to be once again reformed during Alphonso Mackenzie's directorship.

"Barton, Romanoff - They never have an extraction plan."
"They know that going in."
―Victoria Hand and Phil Coulson[src]

As Clint Barton made the decision not to eliminate Natasha Romanoff, she was recruited for S.H.I.E.L.D., the two were recruited into the STRIKE unit, codenamed STRIKE Team: Delta. Throughout their S.H.I.E.L.D. service, they were assigned to numerous missions, including the one in Abidjan, Ivory Coast.[1], without any need for an extraction plan.[2] As of 2012, the two would be apart of the Avengers, as well as continuing their work as S.H.I.E.L.D. agents, ultimately ending the STRIKE team.[1]

Originally formed by S.H.I.E.L.D., STRIKE tactical unit mostly consisted of undercover HYDRA operatives. Following the end of the Battle of New York, several STRIKE teams led by Brock Rumlow and Jasper Sitwell were sent to the Stark Tower to contain the Tesseract, the Scepter and Loki himself. The Avengers successfully handed them the Scepter, so Sitwell contacted List who was interested in researching it.

The other STRIKE teams were waiting for the Avengers at the lobby, as Alexander Pierce demanded them to turn Loki and the Tesseract to them. However, he was confronted by Tony Stark and Thor who dismissed Pierce's demand, as Loki was an Asgardian war criminal who must be judged by Asgardians. Despite Pierce's efforts, Loki was taken away to Asgard by Thor.[3]

Retaking of the Lemurian Star

"STRIKE, move it out!"
―Brock Rumlow[src]

Brock Rumlow, Jack Rollins and STRIKE unit was assigned by S.H.I.E.L.D. to assist Captain America and Black Widow in recapturing of the Lemurian Star from mercenaries led by Georges Batroc. Following a briefing about the mission, the team joined Rogers and Rumlow killed one of the mercenaries with a silenced shot to the back of the head.

With the pathway clear, STRIKE operatives made their way through the ship, taking position outside the kitchen where the hostages were held. Once Rogers and Romanoff were in position and ready to begin the assault, they killed mercenaries and rescued the hostages, including Jasper Sitwell. Rumlow then informed Rogers and Romanoff about saved hostages and made their escape from the Lemurian Star with all of them.[4]

Following attack on Nick Fury, Rumlow and several STRIKE members were sent to the hospital. When Rumlow received a call from the Triskelion, he informed Rogers that he needed to return to S.H.I.E.L.D. to debrief with Alexander Pierce and accompanied him back to the Triskelion.

Pierce and Sitwell sent Rumlow and the STRIKE team to track down and capture Rogers. They were able to track him to a mall in Washington, D.C. when he and Natasha Romanoff activated a flash drive with a tracker on it. The team arrived at the mall, but despite a long search, they failed to spot the fugitives anywhere within the shopping mall. Later, they arrived at Camp Lehigh which was destroyed by a missile sent by Pierce to kill Rogers and Romanoff. Operatives explored the area, looking through the rubble for their corpses and discovered a pair of shoeprints, telling him that targets had survived and escaped.[4]

STRIKE team captured Captain America, Falcon and Black Widow after the confrontation with Winter Soldier. As operatives surrounded the three with their guns drawn, Brock Rumlow noticed Jack Rollins attempting to execute Rogers and ordered him to stop and wait until they were clear of the media. Then they took their captives to a secure location to execute them, however, they were saved by Maria Hill who pretended one of the STRIKE operatives.[4]

Battle at the Triskelion

"S.H.I.E.L.D. is not what we thought it was. It's been taken over by HYDRA. Alexander Pierce is their leader. The STRIKE and Insight crew are HYDRA as well."
―Captain America[src]

After Captain America revealed that S.H.I.E.L.D. was infiltrated by HYDRA, members of STRIKE stayed loyal to HYDRA. Rumlow and several HYDRA members confronted Sharon Carter and other S.H.I.E.L.D. agents who tried to prevent the launch of the Project Insight. Jack Rollins and the STRIKE team arrived at the room with the members of the World Security Council and held them all at gunpoint. However, they were attacked by Pamela Hawley who revealed herself to be none other than Black Widow in disguise.[4]

"I'm sending you and your STRIKE team to take Coulson and Mack out of the field, by force, if necessary. Clean up whatever mess he's in. That's an order."
"Yes, ma'am."
―Jemma Simmons and Melinda May[src]

With S.H.I.E.L.D. signing the Sokovia Accords, Jeffrey Mace replaced Phil Coulson as the leader of the organization. As part of his moves to separate Coulson's former inner circle, Mace assigned Melinda May the task of creating, training and leading a specialist STRIKE team. May recruited Piper and several more agents to her team.

One day, May trained her team in martial arts in the Playground hangar. After she defeated her opponent, May asked her team why he failed. One of her Agents said the opponent had not seen her back kick, but Piper corrected, answering that he tapped out. Zephyr One then landed and May asked Piper to train them for her. Jemma Simmons and Leo Fitz created for the team some gadgets, including Framework for their training and Mapping-Action Eyewear for battles.

Later, Simmons discovered that May helped Coulson and Alphonso Mackenzie find Daisy Johnson, despite Mace's disapproval. She ordered May and her team to bring the two back and clean up their mess. The team arrived to Los Angeles and May shared the image of the building Coulson and Mackenzie were watching. With I.C.E.R.s, the team took out all of the Chinatown Crew members and took a mysterious box from the scene.[5]

Melinda May informed Piper to get the team ready for training. However, Phil Coulson prepared the team without May's knowledge to restrain her, since she acted strangely. After Coulson brought May to the room, May suspected something was wrong and started fighting her team members. Coulson urged them not to hurt her, but May beat all of them. Surprisingly, director Jeffrey Mace came to the room and managed to knock her out, revealing he was an Inhuman.[6]

As Melinda May and Phil Coulson needed help to get out from South Ridge Penitentiary, Alphonso Mackenzie sent Daisy Johnson to led Prince and James Davis to find May and Coulson. They all geared up as Leo Fitz arrived and provided them with Ghost Infection Antidote. They landed at the prison, where Davis noted that there were no guards present, and the two teams split up. Prince and Davis used I.C.E.R.s to fight their way to Coulson and May and were then tasked with curing Warden Green.[7]

"Stand down! We got a situation. I need your help bringing an EMP back inside."
―Alphonso Mackenzie to STRIKE[src]

Melinda May and members of her team came to Momentum Labs in order to find Lucy Bauer and Eli Morrow. However, Bauer had already left the place. All May and her team found were corpses of S.H.I.E.L.D. agents who were assigned to guard the place. Later, Leo Fitz located Bauer and Morrow in an old Roxxon Corporation powerhouse. May's Team met Phil Coulson, Fitz, Alphonso Mackenzie and Robbie Reyes there. The team split to find the ghost. Mackenzie then ordered the team to get back to the Quinjet and help him carry an EMP device.

As they returned, an explosion went off right in front of them. They then entered to find that Coulson, Fitz and Reyes were caught in an explosion. The team and Mackenzie rushed to find them.[8] The team found Morrow walking in the hallway and asked him to come with them. Morrow used his powers to kill the agents with carbointed sharps and escaped.[9]

Daisy Johnson and STRIKE went to a warehouse where Tucker Shockley and other members of theWatchdogs were hiding. They burst into the warehouse, and used I.C.E.R.s to incapacitate all of them with great ease. They brought all the Watchdogs onboard, where they interrogated Shockley. James Davis and Prince then held Shockley as he talked to Jeffrey Mace and Johnson. Suddenly a twang was heard and Leo Fitz and Jemma Simmons hurried to warn them that Shockley was the bomb. Fortunately, Johnson knocked out Shockley with her powers.[10]

"STRIKE teams, spread out. 100 miles in each direction."
"Way ahead of you."
―Alphonso Mackenzie and Melinda May[src]

Under Alphonso Mackenzie's Directorship, there were several STRIKE teams of two agents, including STRIKE Team: Alpha, Bravo, Charlie and Delta. Melinda May and Davis were part of Alpha team and Elena Rodriguez was part of Bravo. Each STRIKE Team also had their own Quinjet and a group of STRIKE agents in military combat gear.

The original symbol of the STRIKE team, mostly used by undercover HYDRA Operatives. 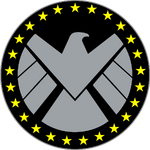 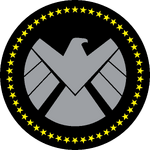 The symbol used during Jeffrey Mace and Alphonso Mackenzie's directorships of S.H.I.E.L.D.

The Marvel Cinematic Universe Wiki has a collection of images and media related to STRIKE.