View source
watch 01:32
Wiki Targeted (Entertainment)
Do you like this video?
Play Sound

Government of Russia
Ministry of Defence

Agents of S.H.I.E.L.D.
*The Hub
*Parting Shot
The Falcon and The Winter Soldier
*The Whole World Is Watching (flashback)

The Russian Armed Forces (Вооружённые Си́лы Росси́йской Федера́ции) are the military service of Russia, established after the dissolution of the Soviet Union.

Following the conclusion of World War II and dissolution of the Soviet Union, Soviet Armed Forces was disbanded and reformed into the Russian Armed Forces. Several HYDRA operatives, led by Vasily Karpov worked undercover inside the Russian military, using an old facility in Siberia as the hub for the Winter Soldier Program.[1]

Serving within Russian Armed Forces, Georgi Luchkov established illegal weapons business in Russia, using Solohob as a front of his business. Eventually, Luchkov's criminal activity drew the attention of S.H.I.E.L.D., as Black Widow was sent to Russia to investigate Luchkov and his weapon traffic.[2]

Androvich joined the Russian Armed Forces after leaving the KGB, and soon was promoted to General and even became the Minister of Defense. Androvich personally overseeded operations of the Russian military and Ministry of Defence.[3] 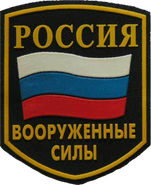