"It's like the... The invisible quantum mechanics inside the boxes, moving in and out of our dimension."
―Leo Fitz[src]

The Quantum Batteries are devices created by Joseph and Lucy Bauer under the influence of the Darkhold.

The batteries harness inter-dimensional energy via advanced quantum physics. After the attack on the scientists, excluding Joseph Bauer, perpetrated by Eli Morrow, their forms were imprisoned in the Quantum Batteries for several years.[1] As a result of being exposed to the Quantum Particle Generator, the scientists were being drawn into another dimension but because of being trapped in the batteries, they became stuck between dimensions, gaining ghost-like abilities, including the ability to induce madness in other people through physical contact or a whisper.[2]

Years after he was put in prison for beating Joseph into a coma, Morrow told Chen of the Chinatown Crew to steal one of the batteries, claiming it contained a weapon that would help the Watchdogs' war on Inhumans. After getting out of prison, Chen hired the Aryan Brotherhood to steal the battery containing Lucy Bauer's form, which they left in a transport truck for the Chinatown Crew to find. Eventually, Chen himself opened the battery, inadvertently freeing Lucy.[3][2]

Lucy's battery was soon recovered by S.H.I.E.L.D.. Upon examination back at the Playground, Jemma Simmons assumed it to be just an empty box, but Leo Fitz took a closer look and discovered the box's true nature.[4]

Lucy later made her way back to Momentum Labs and freed Hugo, Frederick and Vincent from their respective prisons.[4]

The batteries would later be utilized by Lucy again after she kidnapped Morrow from S.H.I.E.L.D.'s protection to force him to fix her body.[5]

Morrow would later utilize the batteries to perform a perfected version of his initial experiments to grant himself power.[1]

Later, the remaining batteries were brought back to the Playground base where they were examined by Dr. Holden Radcliffe and Aida. The batteries were used in the construction of the Inter-Dimensional Gate during the rescue of Phil Coulson and Leo Fitz.[2] and again to transfer Eli Morrow and his Quantum Battery to another dimension.[6]

Aida and Anton Ivanov used the Quantum Batteries in order to built a machine which would create a living body for them.[7] 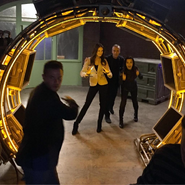 Retrieved from "https://marvelcinematicuniverse.fandom.com/wiki/Quantum_Batteries?oldid=1121136"
Community content is available under CC-BY-SA unless otherwise noted.