Phase Two: Marvel's Avengers: Age of Ultron is a book based on the film of same name. The audiobook version is narrated by Tom Taylorson and is included in Phase Two Box Set. 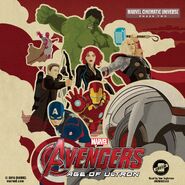 Add a photo to this gallery
Retrieved from "https://marvelcinematicuniverse.fandom.com/wiki/Phase_Two:_Marvel%27s_Avengers:_Age_of_Ultron?oldid=888745"
Community content is available under CC-BY-SA unless otherwise noted.