Phase One: Captain America: The First Avenger is a book based on the film of same name. The audiobook version is narrated by Tom Taylorson and is included in Phase One Box Set.

Steve Rogers was once just a scrawny kid. But after a top-secret government experiment, he became Captain America.

Join the action when this Super Hero protects the free world against the Red Skull and HYDRA in this complete origin story as told in Captain America: The First Avenger. Re-live all of The Avengers' individual stories before they reassemble in Marvel's Avengers: Age of Ultron. 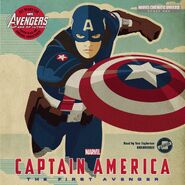 Add a photo to this gallery
Retrieved from "https://marvelcinematicuniverse.fandom.com/wiki/Phase_One:_Captain_America:_The_First_Avenger?oldid=888749"
Community content is available under CC-BY-SA unless otherwise noted.