The Phase Meter is a device used by Jane Foster to measure cosmic energy within the Nine Realms.

After Thor's departure, Jane Foster entered a partnership with S.H.I.E.L.D., the information Thor shared with her regarding the Nine Realms making her something of an expert adviser regarding Asgardian cosmology.

Two years after the events in New Mexico, Lewis and Jane Foster were called to London by Erik Selvig, who had been there for several weeks researching a new series of anomalies. After several days without any word from Selvig, Lewis discovered that Selvig's scientific equipment was acting up, and brought this information to Foster. Following the Phase Meter readings, Foster and Lewis, accompanied by Lewis' own intern Ian Boothby, traveled to an abandoned warehouse where a number of portals had appeared, disrupting the laws of physics.[1] 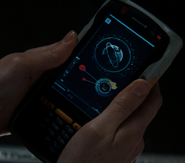 Retrieved from "https://marvelcinematicuniverse.fandom.com/wiki/Phase_Meter?oldid=187018"
Community content is available under CC-BY-SA unless otherwise noted.