"I'll do that on the plane to Peru."
"Uh, you're what the where now?"
"Peru. The country."
―Howard Stark and Peggy Carter[src]

Peru, officially the Republic of Peru, is a country in South America.

"My country commissioned that weapon decades ago. After the fall of HYDRA, many scientists followed their Nazi friends to hide on this side of the world."
"German engineering."
"The weapon was lost during a clash in the jungle until today."
―Camilla Reyes and Phil Coulson[src]

A group of former HYDRA scientists, seeking asylum in Peru following their defeat in World War II, developed a weapon for the Peruvian government using the Tesseract fuel cells first designed by Arnim Zola. The weapon was lost during a battle in the jungle, and ended up encrusted inside an Incan temple in the Llactapata region.[1]

"This plane is such a step up from the R.V. we used to work out when you were stationed in Cusco."
―Camilla Reyes to Phil Coulson[src]

In 2002, Phil Coulson was assigned a mission in Peru with a hundred men at his disposal. Coulson was stationed at Cusco undercover in an R.V., getting the assistance of Camilla Reyes, a member of the Policia Militar del Perú during his mission.[1]

In 2013, a group of archaeologists discovered an Incan temple in Llactapata and started studying its artifacts, discovering that one of them appeared to be impossible. The leader of the expedition informed the authorities about the discovery, and they dispatched a squad of soldiers from the Policia Militar del Perú under the command of Camilla Reyes in order to secure it.

S.H.I.E.L.D. also learnt about the discovery and sent one of its teams led by Phil Coulson to examine and retrieve the object. Coulson's team arrived at the area, that had presented a spike of violence due to rebels attacks, so Agents Grant Ward and Melinda May took necessary precautions to assure their safety.

Agents Leo Fitz and Jemma Simmons discussed the fauna of the country upon arriving, with Fitz happy about the possibility of seeing one of the 32 species of monkeys in the country, while Simmons was more worried about the 200 species of snakes and other dangers, such as earthquakes, malaria, and dengue fever.

Skye tried to convince Coulson to warn the local communities about the danger the 0-8-4 might pose, as both rebels and guerrillas had been active in the area, but Coulson dismissed the idea citing an example of how keeping contained the information of an Anti-Matter Meteorite that was about to hit Miami helped avoid spreading panic. Her role during the mission was to create a diversion, something that was totally against Skye's philosophy.

Coulson went to interview the lead Archaeologist, who informed him about the discovery, and led them to the location of the 0-8-4 embedded in a wall of the temple. Coulson asked the Archaeologist to evacuate the site with his team until the risk the object might pose was determined.

Fitz and Simmons started studying the item using their D.W.A.R.F.s, and Skye tried to find information about it on the internet, but there was no data stream about it. Simmons determined that, according to the fossiliferous rock formations of the wall, the item appeared to have been in the rock for 1500 years, while the temple was constructed about 500 years, and theorized its possible alien origins. On the other hand, Fitz discovered that the craftsmanship of the object was similar to German items.[1]

Arrival of the Police Forces

Grant Ward and Melinda May briefly chatted outside the temple, about May's reputation and her nickname, the Cavalry, earned after a mission in Bahrain, but they realized they were being surrounded by Peruvian soldiers. The S.H.I.E.L.D. agents easily defeated the first ones, but they were surrounded by Camilla Reyes' squad.

Phil Coulson exited the temple to explain to the soldiers their purpose there, and recognized Reyes from a mission they performed together ten years earlier near Cusco, before Reyes' promotion to the rank of Comandante. With the situation seemingly solved, both parties lowered their weapons, and Coulson formally introduced Reyes to Ward and May, and ordered them to accompany the rest of the team.

Reyes wanted to speak to Coulson about how to proceed regarding the discovery on Peruvian soil, but Coulson let her know that an 0-8-4 superseded all national claims. Reyes lowered the tone of the conversation, and they started to catch up about what happened since their last encounter.

Leo Fitz and Jemma Simmons continued to study the Peruvian 0-8-4, discovering that it had a functioning power source but the readings had no sense. Skye, confused by their terminology, intended to go outside to check on Coulson, but Ward arrived to inform them of the soldiers' arrival. Skye and Ward clashed about their opinion of the motivation that drove local rebels to fight the authorities. Ward tried to rush Fitz and Simmons in their analysis.

Reyes invited Coulson to some of what she defined as the best chocolate in the world, produced from the cocoa that grew in a secret valley in Peru, and asked for a chance to keep the device. As Coulson assured they could find a way to solve this respectfully for her country, they were attack by a group of rebels.[1]

"This area has lots of rebel uprisings."
"Yeah, people are fighting back against the government's mining policies."
―Grant Ward and Skye[src]

Local rebels attacked the excavation site, destroying vehicles with heavy gunfire and endangering the mission that Phil Coulson and his team were tasked to perform. Coulson aided Camilla Reyes and her squad in fighting back the rebels.

Grant Ward took the 0-8-4 from the wall despite Leo Fitz's warnings of how dangerous it could be if improperly handled, and exited the temple to clear a path for his teammates. Reyes was surprised to see that Coulson's agents were not combat experts as she thought, but Ward used a Thunderstick to clear their escape path.

Melinda May arrived in the S.H.I.E.L.D. SUV, shielding her teammates from gunfire, and both the Peruvian soldiers and the S.H.I.E.L.D. agents managed to escape to the Bus, departing Peru to a S.H.I.E.L.D. containment facility despite Reyes' wish to head to a Policia Militar del Perú airfield in Iquitos.[1]

"You'd probably head to South America. You speak Spanish?"
"Vacation Spanish."
"Lima, most likely, what with the growing food scene."
―Melinda May and Phil Coulson[src]

Lima, the capital of Peru, was the location where Melinda May guessed Phil Coulson would hide if he ever wanted to abandon S.H.I.E.L.D. and disappear; or go "off-grid" like Richard Lumley did.

She chose that location as Coulson would probably go to South America because he spoke Spanish, though Coulson corrected her that he spoke "vacation" Spanish. May even dared to guess that Lima would be his most probable destination given his love for the growing food scene.[2] 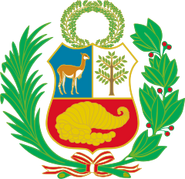 Escudo de armas
Add a photo to this gallery

Retrieved from "https://marvelcinematicuniverse.fandom.com/wiki/Peru?oldid=1040689"
Community content is available under CC-BY-SA unless otherwise noted.