"It's the Spy's Goodbye."
―Bobbi Morse

Parting Shot is the thirteenth episode of the third season of the television series Agents of S.H.I.E.L.D..

Bobbi and Hunter become ensnared in an assassination plot after tracking Malick to Russia. As S.H.I.E.L.D. races to save the lives on the line, the team is changed forever.

Gideon Malick's plane lands in Moscow and he starts moving trucks to a Russian Inhuman Sanctuary in Siberia. Bobbi Morse and Lance Hunter exit the hold and hide, watching the trucks and reporting back to Coulson's Team, flying over on the Zephyr One. They follow the trucks. Hunter and Morse spy on the Sanctuary from the nearby woods. They discuss how they have never had a vacation together, and they notice a tied up Inhuman being taken into the compound. They are suddenly caught by four soldiers. The first attempt to talk their way out of the situation but then resort to combat as the two of them take out the soldiers.

Having now landed nearby, Hunter and Morse rendezvous with the rest of the team on the Zephyr and discuss plans to infiltrate the Russian Facility. Morse and Lance Hunter hide from a patrol as they move in on the base. They discover the dead body of the Russian Prime Minister Dimitri Olshenko's attaché Yuri Krupin.

Morse, Daisy Johnson and Alphonso Mackenzie break into the security room of the facility. Morse takes the clothes of the guard she knocked out to use as an undercover disguise, and leaves to find Malick and Anton Petrov. Johnson hacks into the security footage and doors so as to cover their tracks. Morse infiltrates a meeting between Malick, Petrov and some Federal Protective Service agents. They discuss their plans for an Inhuman reservation in Russia, but how Olshenko is against it and sent his attaché Krupin to shut down the operation. Petrov informs them that Androvich has killed Krupin, because he was offended by the position, being an Inhuman himself. Coulson's team listens in from Morse's comms. Petrov says that Androvich is in restraints on site, and Hunter, hearing this, works out Androvich was the Inhuman in the trucks. Malick tells the group that they need allegiance with the Inhumans, but that the Prime Minister cannot lead them. He suggests releasing Androvich to eliminate those against the idea. Coulson realizes he is staging a coup.

Melinda May and Hunter discuss Andrew Garner and Hunter's recklessness in the Attack on Grant Ward, and May tells him that S.H.I.E.L.D. should be about sacrifice for the greater good. Morse follows the group in disguise when a worker at the facility notices she is missing her tie. She knocks him out, but in the commotion, she loses Petrov and Malick. Johnson attempts to hack and open the door for her to get in because Androvich is being cut loose.

Simmons reports on the cause of Krupin's death, saying that it seems he was strangled, but there is no external evidence of physical harm on his body, suggesting Androvich's power is psychic and not physical. Hunter is confused when he sees Malick leaving. Johnson gets Morse through to the general's room, but he escapes.

Coulson notices AW139 helicopters arriving, and realizes the Prime Minister and his detail are traveling to the compound, and that Malick is planning for Androvich, on the loose, to kill him. He instructs his team to ignore Malick and protect the Prime Minister.

Olshenko arrives and learns from Petrov about Krupin being killed. Olshenko declares them traitors and a fight breaks out. The S.H.I.E.L.D. agents drop smoke grenades and Hunter takes Olshenko, with Morse taking the general in the other direction, with Johnson and Mackenzie following behind. Androvich uses his abilities of Darkforce manifestation to manipulate his shadow's density and turn on the trio, attacking them. They cannot fight back, as he is intangible. Meanwhile, Petrov tries to kill Olshenko, but Hunter shoots him first. Simmons realizes the team has to kill Androvich himself to prevent him from creating any more manifestations. The general's shadow attacks again, taking out Johnson, then going after the Prime Minister. Before he can kill Hunter and him, Morse runs ahead and shoots the general among his guards. She and Hunter are surrounded and taken in by the general's guard for the murder, and the deaths of Petrov and Krupin.

Coulson contacts Ellis to get involved and save the lives of Morse and Hunter. At Moscow's Interpol Black Site, interrogation begins on Morse and Hunter over the Infiltration into the Russian Inhuman Sanctuary and accusations that they are former agents of S.H.I.E.L.D. Morse ignores the questions and just facetiously replies asking for a burger and fries, while Hunter pretends to be clueless and insists that he was just looking for mushrooms. Morse and Hunter are put through polygraph lie detector tests, but avoid answering the questions. However, when Morse denies that she was the one to kill Petrov, Duval plays this is as a confession, and Hunter is dragged away from his interrogation. Morse is informed by Duval that she must reveal she is from S.H.I.E.L.D. to save Hunter from being executed by the firing squad, putting her in a dilemma. Hunter is taken from the firing squad when Matthew Ellis arrives and intervenes. Morse and Hunter talk together about what to do next, and the difficulty of their situation.

Ellis tells Olshenko there was a coup attempt on his life and he should be appreciative. Coulson also arrives, introduced as a high up member of the ATCU. He informs the Russian Prime Minister that Androvich was trying to kill him.

Coulson enters the room to speak to Morse and Hunter. He pretends not to know them, then uses his prosthetic hand to subtly turn off the signal for 90 seconds. He tells Hunter and Morse the risky extraction plan, willing to try to get them out despite the high stakes that S.H.I.E.L.D. will be exposed and taken down, and a low chance of success. Morse and Hunter will also have to change their identities and their families will have to move. However, the duo refuse. They tell Coulson that they are willing to take the hit, so as to protect S.H.I.E.L.D. When he sees their determined resolve, Coulson sadly and reluctantly agrees that he will let them go. They will be released from Interpol, but will almost definitely be tailed by agents who still suspect them. Because of this, they can never speak to S.H.I.E.L.D. or their friends again, as it would give them away and the whole of S.H.I.E.L.D. The signal comes back on and they continue to keep up the pretense that Coulson does not know them. He negotiates the release of the duo and then has to leave them on their own. Coulson returns to the Zephyr One and is downhearted when he has to explain to the team, especially a very emotional Alphonso Mackenzie, why Hunter and Morse are not coming back, and can never come back.

Hunter and Morse discuss what they can do next. They notice a conspicuous man nearby, who they realize is spying on them. Suddenly, the waitress brings them a shot glass, ordered by a "secret admirer." They look over and see Jemma Simmons seated across the room, smiling wryly in their direction, and realize that she cannot come and speak to them because of the spy, and this will always be the situation. The waitress brings more and more glasses, each one ordered by a member of their team from a different place in the pub. Each member of the team gives them a subtle nod of recognition of what they have done and a fond farewell. Morse realizes it is a Spy's Goodbye. Each member of the team leaves one by one. Mackenzie stays a little longer, tearing up as he has to leave his close friends. Morse and Hunter become very emotional, and hold hands, knowing they at least have each other for support to make it through.

Malick returns home and reunites with his daughter Stephanie Malick. The two of them shoot birds together and discuss Hive, and how he seems to be waiting to take action. Stephanie says she knows he will change the world. 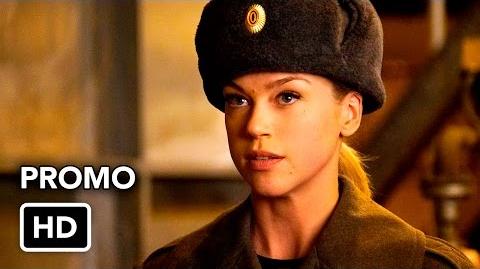 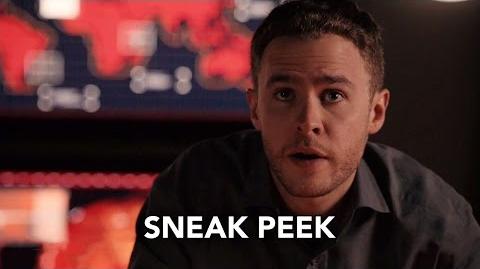 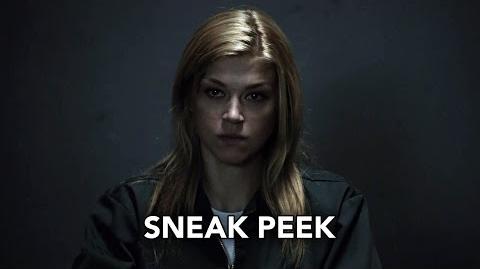 The Marvel Cinematic Universe Wiki has a collection of images and media related to Parting Shot.