Marvel Cinematic Universe Wiki
Register
Don't have an account?
Sign In
Advertisement
in: Articles to be expanded, Items, Uniforms,
and 9 more
English

"Didn't I keep it under wraps that the king of a third world country runs around in a bulletproof cat suit?"
―Everett Ross to T'Challa[src]

The Panther Habit is a uniquely crafted vibranium-weave suit used by the Black Panther, the protector of Wakanda.

"The Black Panther has been a protector of Wakanda for generations. A mantle passed from warrior to warrior."
―T'Challa[src]

The Panther Habit has been worn by the King of Wakanda for generations since the time of Bashenga, adopting the mantle of "Black Panther" to be Wakanda's protector. Centuries later, the Habit was adopted by King T'Chaka.[2][3]

"I found my daddy with panther claws in his chest! You ain't the son of a king, you're the son of a murderer!"
―Erik Killmonger to T'Challa[src]

In 1992, T'Chaka flew to Oakland, California in the Royal Talon Fighter to Prince N'Jobu's safehouse. After his Dora Milaje escorts verified N'Jobu's identity, T'Chaka greeted his brother then went on to tell him of an attack orchestrated by Ulysses Klaue that ended in the death of many Wakandans, as well as the theft of a large supply of Vibranium. T'Chaka then asked N'Jobu why he betrayed Wakanda to Klaue, to which N'Jobu adamantly denied.

However, T'Chaka had previously sent Zuri to keep an eye on N'Jobu, operating under the alias of "James", who outed the Prince and revealed the stolen Vibranium hidden in his apartment. After hearing N'Jobu's confession, T'Chaka ordered his brother to return to Wakanda to face trial for his treason, but N'Jobu instead retaliated against James, intending to kill him. Before he could, T'Chaka disarmed him and killed him with his claws, bring Zuri with him back to Wakanda.[1]

In 2009, T'Chaka's son, Prince T'Challa, adopted the mantle of the Black Panther as his father retired from the role. T'Challa then designed his own Panther Habit, taking inspiration from his father's Habit.

In the week following his appointment as Black Panther, T'Challa and Okoye were sent on a mission to save Wakandan hostages from Zanda, a Narobian terrorist, and Douglas Scott. During their confrontation with Zanda, T'Challa was shot in the shoulder with a Vibranium bullet, damaging it.[2]

"The guy shows up dressed up as a cat. You don't want to know more?"
"Your suit. It's vibranium?"
―Sam Wilson and Steve Rogers[src]

T'Challa donned the Panther Habit in order to avenge his father following his death in a terrorist attack believed to have been committed by the Winter Soldier. Tracking Bucky Barnes to Bucharest, Black Panther intercepted him during his escape from the Joint Terrorism Task Force, fiercely brawling against the infamous assassin until a helicopter distracted him, allowing Barnes to flee. T'Challa quickly followed, hunting him down to a traffic tunnel until he found himself in a standoff against Winter Soldier, as well as Captain America and Falcon. However, the three were interrupted by the arrival of War Machine and an entire police squad, to whom T'Challa surrendered to and removed his mask, revealing his identity.[3]

Clash of the Avengers

Seeking revenge against the escaped Winter Soldier, T'Challa would don the Panther Habit again, fighting on Iron Man's side in the Clash of the Avengers against Captain America and Winter Soldier along with their supporters. However, he was stopped short of capturing the pair by Black Widow, who held him back with her Black Widow's Bite as they escaped in a Quinjet. Later, planning to finally find and kill the Winter Soldier, T'Challa followed Tony Stark to the Winter Soldier laboratory in Siberia where he discovered that the terrorist attack that killed his father was actually orchestrated by Helmut Zemo. Seeing the effects of revenge on Zemo, Black Panther chose to spare him to the point of preventing Zemo from taking his own life.[3]

During a rescue mission to rescue Nakia, a Wakandan spy, T'Challa donned the suit and used it against the kidnappers in order to rescue her.[1]

"Functional, but old. 'Hey! People are shooting at me! Wait, let me put on my helmet!' Now, look at these. Do you like that one?"
"Tempting, but the idea is to not be noticed. This one."
―Shuri and T'Challa[src]

After learning that Ulysses Klaue had been spotted in South Korea, Shuri presented T'Challa a pair of new, upgraded versions of the Habit developed by the Wakandan Design Group, which were much lighter than his previous design due to being constructed from nanotechnology, as well as able to be stored within the teeth of a ceremonial necklace.

After calibrating the Habit's nanites to the vibranium implant behind T'Challa's ear, Shuri instructed him to mentally command it to activate. Once commanding it, T'Challa watched in awe as the Habit materialized seemingly from nothing, complimenting his sister's design. Shuri then demonstrated the nanites' ability to redistribute energy as T'Challa was thrown across her lab by a pulse released from striking the habit. Impressed with his sister's modifications, T'Challa decided to continue using the upgraded Habit instead.[1]

"Look at your suit. You've been taking bullets, charging it up with kinetic energy."
―Shuri to T'Challa[src]

After they failed to capture Ulysses Klaue inside the Jagalchi Market Casino, T'Challa, Okoye, and Nakia chased after the arms dealer and his crew on the streets of Busan. After Okoye tossed a Remote Access Kimoyo Bead onto the hood of a nearby car, she and Nakia quickly went off in their own vehicle, with T'Challa close behind. As he ran to follow the chase, T'Challa donned the upgraded Habit and leaped onto the car being operated by Shuri from her sand table.

As they caught up to the convoy, Klaue and his men split into two groups. Okoye and Nakia followed one while Black Panther and Shuri followed the other. As they followed Klaue's goons, Black Panther was fired upon, prompting Shuri to remind him of his Habit's ability to redistribute the energy it gained from the gunfire. T'Challa then ordered his sister to drive around a large semi-truck, out of sight from Klaue's goons, where he leaped over and onto the hood of their SUV. Before they could react, Black Panther released a kinetic energy pulse, totaling the car and flipping it down the bridge as he used the energy to launch himself back to Shuri's car.

As he returned to the chase, Black Panther was fired at by Ulysses Klaue after he took out Nakia's Vibranium car using a modified Wakandan mining tool. With his new weapon, Klaue was able to destroy the car Shuri was piloting, launching T'Challa into the air. However, T'Challa reacted quickly, running along the side of a building before launching himself at Klaue's car. Landing near the hood, he used his Vibranium claws to rip out the wheel disk of the car, causing it to crash.

With nowhere for Klaue to go, T'Challa told him that he would finally pay for his crimes after years of running. Ripping off his prosthetic arm, T'Challa demanded to know where he was able to get Wakandan technology, but Klaue continued to taunt him. As T'Challa prepared to kill the South African mercenary, Okoye arrived, reminding him that there were witnesses in the area. Klaue began mockingly begging for mercy, to which T'Challa stated that every breath Klaue took was mercy from him. T'Challa then arrested Klaue, bringing him to a CIA black site for questioning.[1]

"Turn on the train on the bottom track."
"The destabilizers will deactivate your suit! You won't have protection!"
"Neither will he!"

When Erik Killmonger took the throne he took the golden Panther Habit that Shuri had left behind at her lab for himself. T'Challa and Killmonger both used their upgraded Panther Habits to great effect. T'Challa used his kinetic energy pulse to take out fleets of the Border tribe, first to get past the first enemy lines, and later to clear the path to save his sister Shuri.

Shuri then switched tactics, firing a continuous blast from her gauntlets. This briefly slowed him down, but he then used his claws and short spear to destroy the gauntlets. At this point, T'Challa had escaped the Border tribe and tackled Killmonger to save Shuri, causing them both to tumble onto the train tracks in the mines. They both clawed at each other, before leaping and activating their kinetic pulses.

T'Challa devised a plan to deactivate Killmonger's suit by activating the train magnets, but at the cost of deactivating his own. The two continued to battle each other, while T'Challa angrily questioned Killmonger's motives, stating he was destroying the world. Killmonger allowed a brief moment of emotions as he stated with tears the world took away everything away from him, before resorting back to anger and mocked Zuri's death, causing T'Challa to roar in anger. Eventually, they both wrestled over Killmonger's short spear, with T'Challa tossing it in the air, before catching it and plunging it into the destroyed section of Killmonger's suit, mortally wounding him.[1]

In 2018, T'Challa donned the Habit during the battle and the Habit’s kinetic energy pulse were vital in gaining an edge against the Outriders and Cull Obsidian. However, it proved to be worthless against Thanos, who punched T’Challa in the face, causing the energy pulse to fire backwards into the suit. Soon after, the Habit disintegrated.[4]

In 2023, as a result of the Blip, the Habit rematerialised. T'Challa then used the Habit's capabilities with proficiency during the ensuing battle, unleashing massive pulses of accumulated kinetic energy to take down several alternate Chitauri and Outriders.[5]

"I got a look at your suit. Vibranium weave. I'm very impressed."
―Natasha Romanoff to T'Challa[src]

The Panther Habit's vibranium composition makes the user completely bulletproof and near-indestructible, able to withstand two explosive arrows from Hawkeye's arsenal at point-blank range without any noticeable damage.[3] Due to the lightweight properties of the metal, the suit doesn't inhibit the wearer's mobility in the slightest, and the user becomes physically superhuman, enhancing their durability to be able to withstand explosions and gunfire, as well as strikes from physically stronger opponents. The gloves have vibranium-laced knuckles built in, while the toes are also laced with vibranium, both of these are meant to enhance strike attacks. The suit is accompanied with:

"It is lighter, thinner and it absorbs energy for redistribution."
―Shuri[src]

Presented to T'Challa upon his return to Wakanda, the latest versions of the Habit were highly upgraded by Shuri and now technologically superior to his original, as well as completely bulletproof.[1] Most notably, the Habit was outfitted to harness a powerful energy field that it absorbs from external sources for later distribution, greatly enhancing its offensive capabilities. This version of the Habit is constructed from Wakandan Vibranium nanobots stored in a ceremonial necklace worn by the Black Panther, that materialize into the suit.

"Now tell it to go on. The entire suit fits in the teeth of the necklace."
―Shuri[src]

"The nanites absorb the kinetic energy and hold it in place for redistribution."
―Shuri[src] 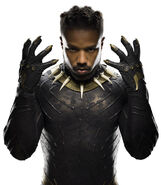 The Marvel Cinematic Universe Wiki has a collection of images and media related to Panther Habit.