One of Us is the thirteenth episode of the second season of the television series Agents of S.H.I.E.L.D..

Cal seeks revenge on Coulson by assembling a team of Super Villains to destroy S.H.I.E.L.D. Meanwhile, May calls on renowned Dr. Andrew Garner, her charismatic ex-husband, with a crisis that threatens to tear the team apart.

Alphonso Mackenzie took Lance Hunter to a S.H.I.E.L.D. Safe House and locked him in the bathroom. He called Bobbi Morse and asked for advice; he did not like this situation and had no exit strategy. She stopped her conversation with Jemma Simmons, who was analyzing Skye's blood work and giving Leo Fitz the silent treatment, to tell Mackenzie that she would set up an extraction. In the meantime, she wanted him to get Hunter, who was yelling insults, a beer to calm him.

Phil Coulson and Melinda May placed Skye on the Index; as a requirement for a S.H.I.E.L.D. agent on the Index, Skye needed a psychological assessment. Coulson asked May to request the help of Andrew Garner, her ex-husband.

May went to Culver University, where Garner was a professor, and convinced him to help Skye. Garner made it clear that he was helping Skye, not her, not S.H.I.E.L.D. The two returned to the Playground and Garner boarded the Bus where Skye had made a residence.

Meanwhile, Calvin Zabo recruited a group of people from the Index to take revenge against Coulson and to show the world how S.H.I.E.L.D. treated people with powers. The group broke into the Brynmore Psychiatric Facility and freed John Bruno and David Angar, two individuals who were imprisoned there. While there, Zabo left Coulson a clue to where he wanted a confrontation.

Coulson took Morse with him to Brynmore when he learned there was a break-in. They learned of Zabo's involvement; inside, Morse fought Bruno and easily subdued him. Coulson found Zabo's clue but could not discern its meaning; he decided to talk to Morse as his subconscious worked on it. He told Morse that he noticed Hunter was not present and wanted to know if it was because of the two's sexual relationship. Morse admitted that she ended the relationship, but lied, saying that it caused Hunter to leave and Mackenzie was off looking for him. Coulson then realized where Zabo went.

Zabo took his team to a high school in Manitowoc, Wisconsin. There the restraining mask worn by Angar was removed and he let out a scream that incapacitated the students there. Zabo then waited for Coulson to arrive.

Mackenzie brought Hunter a Hawaiian style pizza and a beer and asked Hunter to trust him. They reminisced about the mission in Dubai where they and Morse first met; Hunter said that the main thing he remembered about that mission was that he was kept in the dark because he was not a S.H.I.E.L.D. agent.

Skye had a bad dream after her session with Garner and caused an earthquake. Simmons insisted on giving Skye a sedative; Garner advised against giving her drugs. As the two talked, the Bus began shaking again; it was May taking the plane to meet Coulson without the permission of Garner or Skye. May explained that she did not want to interrupt their session, plus Coulson needed immediate back-up. Skye wanted to help, but Garner and May felt that she was not emotionally ready for a confrontation with her father. Skye convinced them that her relationship with Zabo could be advantageous.

Coulson and Morse arrived at the high school. Coulson explained that his father worked there; Zabo wanted to embarrass Coulson in his home town. Zabo got onto a microphone and taunted Coulson to appear before him and the Slicing Talons. Morse noticed Karla Faye Gideon in the bleachers with a group of catatonic students, threatening to kill them with her nails; she took an ambushing position beneath the stands.

Coulson found himself surrounded by the super villains when May arrived with Skye at gunpoint. This caused Zabo to hesitate; he took time to explain over the microphone how S.H.I.E.L.D. mistreated people like his daughter who have powers. As he passed the microphone to Angar to have him scream, Zabo was teleported away by Gordon.

Gideon then took command and started the battle. Garner grabbed Skye to escort her to safety but they only went a few yards before Skye stopped to watch the fight. Morse ambushed Gideon and fought the woman with her battle staves. Coulson quickly took Angar from the fight. May battled Francis Noche in unarmed combat.

When Coulson approached Wendell Levi, Levi begged Coulson not to hit him. Skye saw the ferocity Coulson had as he knocked Levi unconscious and an earthquake began. The fighting stopped and all turned their attention to Skye. Skye then took control over her power and internalized it.

With the Slicing Talons apprehended, the agents returned to the Playground. Skye had broken her arms in multiple places, so Simmons created gauntlets for her to wear. Garner decided to leave, to May's dismay.

Zabo had a tantrum and destroyed the furniture in the room where Gordon took him. Gordon told Zabo that he was sent for him instead of Skye because he was drawing too much attention to the Inhumans. Zabo adjusted his attire to make himself look more presentable before going to see the one who would decide his fate.

Mackenzie threw a blindfold on Hunter and told him that their ride had arrived. With armed guards surrounding him, Hunter was told that Mackenzie and Morse worked for the "real S.H.I.E.L.D." as he saw its logo on the wall. 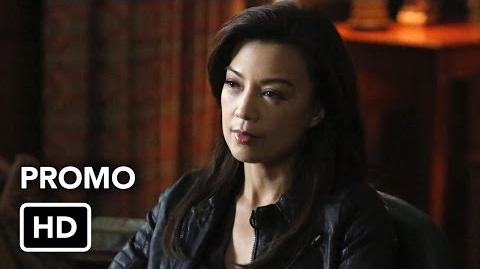 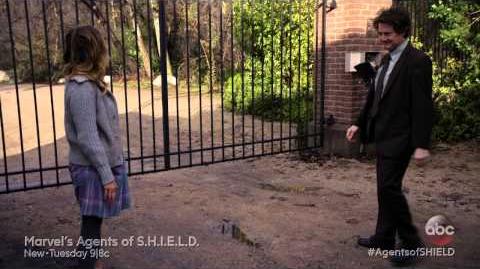 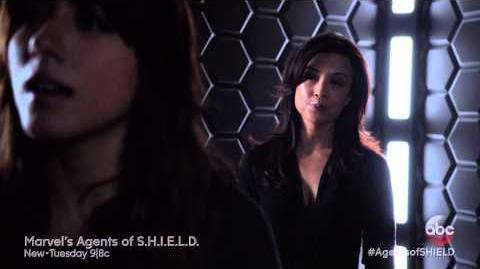 The Marvel Cinematic Universe Wiki has a collection of images and media related to One of Us.