Loki (picture on credits sequence)
What If...?

The Vault, more precisely known as Odin's Vault, also known as Odin's Treasure Room or the Weapon's Vault, was a room in the Royal Palace of Asgard, which held a number of relics that Odin had gained as a result of his victories over the course of his life.

It was eventually destroyed by Surtur during the Destruction of Asgard during Ragnarök.

"The Tesseract was the jewel of Odin's treasure room."
―Johann Schmidt[src]

Guarded by the Einherjar, Odin's Vault is a chamber located at the center of Asgard's Royal Palace of Valaskjalf. The Vault is home to many of Odin's exotic valuables.

Odin captured, stole, purchased and did whatever he could to take all the relics and weapons that could bring about Ragnarök, and he locked them away in a vault in the base of his palace, so anything he thought could bring the universe down is now under lock and key. According to Hela, most of the relics were in actuality useless fakes, such as the Infinity Gauntlet replica, with the exceptions being Mjølnir, the Casket of Ancient Winters, the Crown of Surtur, the Eternal Flame, and the Tesseract.

Home to the incredibly powerful Casket of Ancient Winters, the Weapon's Vault has always been a prime target for those seeking powerful weapons of destruction. During Thor's crowning ceremony, the Vault was attacked by three Frost Giants attempting to steal the casket. However Odin sensed the Frost Giants in the Vault and activated the Vault's deadliest automaton device the Destroyer to dispatch the Frost Giants.[1]

The Tesseract was placed in the Vault following the Battle of New York. During the Second Dark Elf Conflict, Odin commanded the Einherjar to protect the Weapons' Vault. In the end after the Dark Elves were defeated, their weapon, the Aether, was taken by the Asgardians. However, Sif and Volstagg decided to take it to the Collector for safekeeping, since it was considered unwise to keep two Infinity Stones so close together.[2]

After killing Surtur, Thor ordered Einherjar soldiers to place the fire demon's crown in the Vault for safekeeping. Later Hela entered the Vault during her Siege of Asgard, observing several of the relics kept there. She took some of the Eternal Flame and then conjured an obsidian pickaxe to break the floor and access the Asgardian Catacombs, where she used the Eternal Flame to resurrect her Einherjar army as Berserkers, and her dear pet, Fenris. After realizing that Ragnarök was the only way to defeat Hela, Thor sent Loki into the vault to retrieve Surtur's crown and place it on Eternal Flame. This resurrected Surtur and unleashed Ragnarök, resulting in Hela's death, Surtur's death again, and the destruction of Asgard.[3] 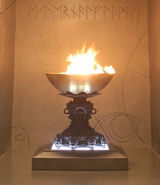 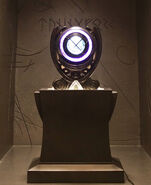 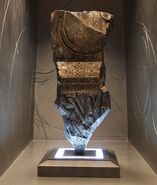 Tablet of Life and Time 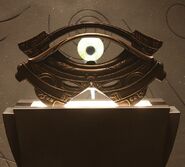 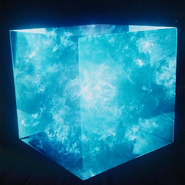 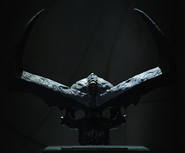 The Marvel Cinematic Universe Wiki has a collection of images and media related to Odin's Vault.
Community content is available under CC-BY-SA unless otherwise noted.
Advertisement