Loki
*Journey Into Mystery
What If...?
*What If... Doctor Strange Lost His Heart Instead of His Hands?
*What If... Zombies!?

The New York Sanctum is one of the three bases of the Masters of the Mystic Arts, alongside the London Sanctum and the Hong Kong Sanctum. Located on 177A Bleecker Street in Greenwich Village, New York City, the sanctum provides mystical defense for Earth and is currently protected by Stephen Strange and Wong.

The Masters of the Mystic Arts defeated the Witch in London; Wong and Daniel Drumm took the Dark Scepter she once possessed to be safeguarded at the New York Sanctum.[1]

During the Chitauri Invasion in 2012, the Ancient One defended the Sanctum from its rooftop.[2]

Attack on the Sanctums

Battle at the New York Sanctum

"Well, a powerful sorcerer, who gave himself over to an ancient entity who can bend the very laws of physics, tried very hard to kill me, but I left him chained up in Greenwich Village, and the quickest way back there is through a dimensional gateway that I opened up in the mop closet."
―Doctor Strange[src]

When the Zealots attacked the New York Sanctum, Doctor Strange was thrown into the Sanctum through its portal on Kamar-Taj. He witnessed the Zealots killing Daniel Drumm before taking them on. During the fight, Strange used the Rotunda of Gateways to trap the Zealots across Earth. As Strange and the Zealot leader Kaecilius fought, one of the relics stored there, the Cloak of Levitation, was released and started to defend Strange.

Strange immobilized Kaecilius with the Crimson Bands of Cyttorak and, as he talked to him, he was attacked and stabbed by Lucian Aster with a Space Shard. As the Cloak pinned the Zealot behind, the injured Strange created a portal to Metro-General Hospital.[3]

Battle of the Mirror Dimension

"You defended the New York Sanctum from attack. With its Master gone, it needs another, Master Strange."
―Ancient One to Doctor Strange[src]

Once Strange returned to the New York Sanctum, he found Karl Mordo and the Ancient One assessing the damages to the Sanctum, with Kaecilius already gone. The Ancient One then invited Strange to become the new Master of the New York Sanctum to replace the now deceased Drumm, but he refused the offer. Later, Kaecilius and the Zealots returned to the Sanctum and prepared to destroy it.

After Strange had defeated Kaecilius and the Zealots during the Battle of Hong Kong, Strange accepted his duty and moved into the New York Sanctum.[3]

"My name is Doctor Stephen Strange and I have some questions for you."
―Doctor Strange to Thor[src]

Months into his time as the New York Sanctum's guardian, Doctor Strange invited Thor into the New York Sanctum. There, Thor was warmly greeted with tea, which was then transmutated into beer in his hand. Strange agreed to release Loki and help Thor search for his father, Odin, who had been exiled to Earth, on the condition that all parties return promptly to Asgard thereafter. Thor was then abruptly teleported around the Sanctum with Strange while discussing this, with Thor breaking a bookshelf and spilling his drink.

Strange then plucked a hair from Thor's scalp, scanning it with his magic to conjure a portal to Norway, where Odin was. Strange then returned Loki to the Sanctum's atrium, enraging Loki with his sorcery and prompting him to summon his blades. He then whisked the two into the portal.[4]

One day in 2018, as Stephen Strange was preparing to go on a deli run, he and Wong were interrupted by an object crashing through the roof of the Sanctum. The duo went to investigate and found Bruce Banner slowly reverting from his Hulk form. Banner then warned them that Thanos was coming to which Strange questioned who Banner was talking about.

After Banner had been provided with new clothes and had given a rough explanation of the threat Earth was facing, he had Strange seek out Tony Stark for aid. After the sorcerers had explained the Infinity Stones to the scientists, Stark proposed that they simply destroy the Time Stone to halt Thanos' plans. As they debated their course of action, they suddenly became aware of a Q-Ship above the city, prompting the four to run out of the Sanctum. Afterwards, only Wong returned to the Sanctum.[5]

Theft of the Time Stone

"I'd be careful going that way. We just had the floors waxed."
"I'm looking for Doctor Strange."
"You're about... five years too early."

―Ancient One and Bruce Banner[src]

"How many nights did we sit in the Sanctum Sanctorum, Time Stone in the palm of our hand, knowing we could go back, gathering the courage?"
―Doctor Strange to Doctor Strange[src]

In an alternate universe, Doctor Strange became the Master of the New York Sanctum. There he performed his duties as a Master of the Mystic Arts. One night, Wong advised him to join him for tea so he wouldn't do anything reckless with the Time Stone in which Strange agreed too. The next day, Strange walked out of the Sanctum and found his reality crumbling. After going back inside the Sanctum, Wong gave him a protection spell. As Wong started disappearing, Strange was taken via portal out of the Sanctum by Strange Supreme.[6]

In an alternate 2018, Bruce Banner crashed into the New York Sanctum via the Bifrost Bridge and found the Sanctum empty except for the Cloak of Levitation.[7] 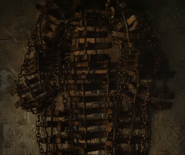 Cauldron of the Cosmos

The Marvel Cinematic Universe Wiki has a collection of images and media related to New York Sanctum.