Daredevil
*One Last Shot
*A New Napkin
The Punisher
*The Abyss

"We go back to helping people out of a crappy office, getting paid in chickens?"
"I think Theo would let us work out of here, to start."
"At least we'd have a place to sell the chickens."

Nelson, Murdock and Page is a law firm in New York City founded by Foggy Nelson, Matt Murdock, and Karen Page. It is the successor firm to Nelson and Murdock.

Following Wilson Fisk's incarceration, Foggy Nelson had decided to found a new law firm with Karen Page's official partnership. Theo Nelson allowed them to use Nelson's Meats to work. Matt Murdock and Page agreed with Nelson's plan and together started their work to help people.[1]

"I work with Nelson and Murdock. They're Mr. Castle's lawyers of record."
―Karen Page to Smith[src]

Upon hearing news reports of Frank Castle had been placed in police custody, Karen Page used her position as Castle's lawyer in order to visit him without Foggy Nelson and Matt Murdock's knowledge. At the Sacred Saints Hospital, she helped Dinah Madani investigate the corpses of the three women supposedly murdered by Castle. With the aid of assistant medical examiner Ed Zatner, the pair found out that the three women were executed at close range, and Castle’s gunfire did not cause their deaths.

With Page being informed of their respective situation, she aided in uncuffing Castle and attempted to reconnect with him only to be rebuffed. Knowing the stakes, Page’s last action before going her separate ways is triggering fire alarms in order to ensure Castle's escape from custody.[2] 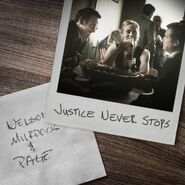