Narblik was a member of the Yondu Ravager Clan who sided with Taserface and against Yondu Udonta.

Like the rest of his Ravager Clan, Narblik was exiled when Stakar Ogord discovered that Yondu Udonta had delivered children to Ego. During his exile, Narblik went to have some fun on the planet Contraxia, where he saw his leader arguing with Ogord. Later, the High Priestess of the Sovereign Ayesha arrived and asked the Ravagers to capture the Guardians of the Galaxy.[2]

Narblik to part to an Attack on Berhert in order to capture the Guardians of the Galaxy. Although Narblik and his teammates fell into the numerous traps set by Rocket Raccoon, the Ravagers were ultimately able to capture both Rocket and Groot, who had been betrayed by Nebula.

However, when Yondu Udonta expressed his intent to sell the Anulax Batteries stolen by the Guardians instead of bringing them back to Ayesha, Narblik was among those who disagreed and ultimately joined the mutiny led by Taserface. As such, Narblik took part in the murder of those who remained loyal to Udonta and to the mockery towards Udonta, Rocket, and Groot.

While Narblik and his teammates were asleep, Udonta and Rocket managed to escape their cell. In the ensuing confrontation, Narblik was killed by Udonta's Yaka Arrow.[2] 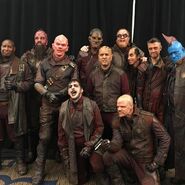 Retrieved from "https://marvelcinematicuniverse.fandom.com/wiki/Narblik?oldid=1037299"
Community content is available under CC-BY-SA unless otherwise noted.