"Mariah doesn't get to win. She's gotta go. And if somebody wants to take her out and there's some cash left over? C'est la vie[1], bitch!"
―Nandi Tyler to Misty Knight[src]

Detective Nandi Tyler is a former classmate and rival of Misty Knight who takes over her position in the New York City Police Department after she gets her arm cut off by Bakuto in the Destruction of Midland Circle.[2]

"Misty was a year behind me at DeWitt Clinton. Both varsity. She took my spot when I twisted my knee."
"I earned my spot. And never gave it back."
―Nandi Tyler and Misty Knight[src]

Nandi Tyler attended DeWitt Clinton High School, and was one year ahead of Misty Knight. They both played on the same varsity basketball team. When Tyler twisted her knee, Misty took her place on the team.[3]

"You almost had our blood on your hands, and look at you; even now, you won't own your shit!"
―Misty Knight to Nandi Tyler[src] 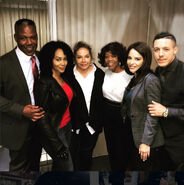 Retrieved from "https://marvelcinematicuniverse.fandom.com/wiki/Nandi_Tyler?oldid=1063482"
Community content is available under CC-BY-SA unless otherwise noted.