Agent of the Time Variance Authority

I specialise in the pursuit of dangerous Variants.Mobius M. Mobius to Loki

Agent Mobius M. Mobius is a high-ranking member of the Time Variance Authority who specializes in the investigations of particularly dangerous time criminals. After beginning an assignment to investigate a variant of Loki who had been killing TVA agents, Mobius recruited another Loki variant in the hopes that he could help the organisation stop his alternate self.

You were created by the Time-Keepers..."
"Yep."
"To protect the Sacred Timeline?"
"Correct.Loki and Mobius M. Mobius

Mobius was created by the Time-Keepers as an agent of Time Variance Authority, the organization that protects the timeline from Variants.[1]

Prior to meeting Loki, Mobius, Hunter U-92, and two other Minutemen traveled to 1549 to the Aix-en-Provence, France to deal with a sixth known attack on the Minutemen. He determined that it was an ambush and the six attacks were most likely caused by the same person.

Encountering a wandering child into the building, Mobius told Hunter U-92 to stand down as he approached the child, apologizing for U-92's actions. After impressing the kid by showing him an animation and gaining their trust, Mobius asked if the boy knew who did it, and he responded by pointing to a stained glass depiction of the Devil. After promising to stop the Devil, he collected the boy's pack of Kablooie gum as a piece of evidence proving that a nexus event had occurred and asked it to be run for sequence and temporal aura, even though U-92 warned him that it was most likely futile.

As the branch was nearing redline, Mobius told the child to wait outside while they reset the timeline. While setting a reset charge, Mobius was interrupted by an agent who had informed Mobius of Loki's crimes against the Sacred Timeline.[1]

Mobius attended Loki's trial, and interfered when Loki was sentenced to by reset by Ravonna Renslayer. Renslayer reluctantly allowed Mobius to question Loki, but had put the responsibility on Mobius to manage Loki, warning him that his idea was bad. Mobius simply responded that he was following a hunch.[1]

While escorting Loki to an interrogation room, Loki threatened to burn the TVA down, and Mobius offered his desk as a starting point, as it had a lot of paperwork that would work as tinder. When Loki was sidetracked by his first glimpse of the city outside, he wondered if it was magic, to which Mobius said it was not. Loki then believed he was in a nightmare, but Mobius said it was a different department and that he would help Loki if he wished to burn down that department.

In an elevator, Mobius introduced himself to Loki, who brushed him off and asked if he was being taken to be executed. Mobius told him that he was taking him to talk instead, and Loki said that he did not like to talk. Mobius then called him out on his lie, and also commented that he loves to lie as well. When asked how long he had worked there, Mobius said it was hard to say as time passes different in the TVA. When Loki was confused, Mobius simply said that he would catch up.

As he continued escorting Loki to the interrogation room, Loki asked if he was part of the TVA workforce and if he was created by the Time Keepers to protect the Sacred Timeline, to which Mobius said yes. When Loki laughed at the ridiculousness of it, Mobius questioned if he liked to talk.

Mobius waved Loki into the interrogation room and sat down at a table that held a device that could play the memories of someone's life. When Loki said he still believed he was going to be killed, Mobius commented on his lack of trust in anyone but himself and that he should slap that motto on a t-shirt while turning on the device. When Loki questioned why he'd never heard of the TVA, Mobius told him that he hadn't needed to because Loki had always lived within his path. Loki tried to ascertain his free will, but Mobius did not rise to the bait. He asked Loki to sit, and Loki tried to attack him, so Mobius used his temporal weapon to transport Loki back to where he was standing before.

Prompting Loki to sit, Mobius began the interrogation by asking for Loki's cooperation and revealing that he knew Loki would try to woo and then betray him. Loki disagreed and said that Mobius knew nothing about him, but Mobius said he'd like to learn. He told Loki of his specialization of pursuing extremely dangerous variants, and then insulted Loki when Loki assumed that he was a dangerous variant. He then asked Loki to answer his set of questions honestly in exchange for something Loki wanted.

His first question was what Loki would do if he returned. Loki said that he would rule Midgard, and Mobius asked what would happen after that. Loki said he wanted to rule the Nine Realms and eventually the universe. Mobius mocked him slightly, but when Loki was offended Mobius told him he was a fan and wondered why someone with so much range simply wanted to rule. Loki told him about the "illusion" of freedom and how living things make mistakes with freedom, and Mobius wondered if he was an exception to this rule. Loki commented on how Mobius was simply a clown for the Time Keeper's circus.

Mobius started the playback on the device, projecting the image of New York City onto the wall. Loki asked what it was, and Mobius explained that it would play his greatest hits. The first scene they watched was when 2012 Loki was tracked down by the Avengers and asked them for a drink. Mobius cracked open a Josta and tried to hand it to Loki but Loki said no and commented on how he knows this memory already. Mobius commented on how for someone born to rule, Loki's nature is to lose.

When Loki threatened him, Mobius turned the device to play the memory of Phil Coulson's death, and pointed out how Loki created his own enemy by giving the Avengers someone to avenge. Mobius then asked if Loki enjoyed hurting people while playing images of destruction from the Battle of New York. Loki said that his games wouldn't work, and that he was not a murderer but a liberator, to which Mobius played the memory of Loki removing an eyeball and commented on his smile and how he enjoyed it. Loki said he was a god, but Mobius said that none of his actions seemed mischievous.

Trying a new approach, Mobius talked about how Loki was good at escaping, and played a memory of Loki being the famous plane hijacker D.B. Cooper. After the memory was done, Mobius exclaimed his disbelief at how Loki was the famous hijacker. When Loki asked where the TVA was before when Loki was meddling, Mobius responded that they were right there alongside him and that his mischievous tricks were all along his set path. When Loki asked why that had the Time Keeper's approval, Mobius explained that the Time Keepers did not dictate the timeline according to approval and disapproval.

Mobius asked what Loki was running from, and when Loki tried to stand up to make a point, Mobius used his temporal weapon to sit him in his chair. Loki explained why he tried to stand up, and Mobius let him stand up for emphasis. When Loki asked him what he wanted, Mobius said he wanted Loki to be honest about his motivations and a deeper understanding of what makes Loki tick. When Loki proposed that the TVA was an illusion and a desperate attempt at control and affirmed his free will.

Going off of that, Mobius played Loki's Speech at Stuttgart, and Loki said that he was on the verge of earning what he was owed, not because the TVA allowed him to. Mobius told him to start taking this seriously and played a memory that had not happened yet, of Loki's trial on Asgard and him speaking to his mother. Mobius told Loki of how, when the Dark Elves attack, Loki attempts to send them to Thor, but indirectly causes them to kill Frigga instead, showing Loki her death. When Loki started to demand where Frigga was and started to accuse that it was fake, Mobius told him that he was always fated to kill his mother and that he always was and will be and continued to press Loki on whether he enjoyed killing people, and an enraged Loki attempted to attack him. Mobius used his temporal weapon to transport Loki to the floor. Mobius told Loki of his predetermined fate to cause suffering and death, before explaining that his role was to help others achieve their best selves while playing a recording of the Avengers. Mobius then helped Loki up from the floor.

Mobius reentered the interrogation room saying that he and Loki could talk again tomorrow, before realizing the room was empty and Loki had escaped. Mobius, Hunter B-15, and five other Minutemen searched for Loki while Hunter B-15 commented that she wasn't surprised. Mobius told her that she shouldn't have interrupted them, and B-15 was insulted by the blame that it was her fault that Loki escaped. Mobius told her that he couldn't have gotten far, and the group split up into two. Hunter B-15 told them to prune the timeline and reset Loki on sight, but Mobius shouted back that they wouldn't be doing that and that Loki could still help them.

When Mobius had returned to the interrogation room, he found Loki there in some distress as he had played his future on the device and seen his future familial relationships and death. Mobius told him he couldn't run anymore. Loki told him that he didn't enjoy hurting people, and he did it because he had to. Mobius asked for more, and Loki told him that it was illusion, a desperate play for control, and that he was a villain. Mobius told him he didn't see it that way, and looked amused when Loki admitted he tried to used the Tesseract. Mobius said he couldn't offer Loki salvation, but instead something better: a chance to work with them to stop an extremely dangerous variant who was actually Loki himself.

The Time-Keepers have built quite the circus, and I see the clowns are playing their parts to perfection."
"Big metaphor guy. I love it. Makes you sound super smart.Loki and Mobius M. Mobius

The Marvel Cinematic Universe Wiki has a collection of images and media related to Mobius M. Mobius. 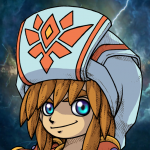 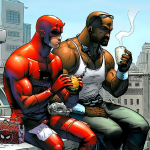