"You think you fight for us? You just fight for yourself. Who's going to avenge my son, Stark? He's dead. And I blame you."
―Miriam Sharpe to Tony Stark[src]

Miriam Sharpe is a U.S. State Department employee and the mother of Charlie Spencer, who was killed during the Battle of Sokovia. Sharpe later confronted Tony Stark, whom she blamed for Charlie's death, and forced him to rethink his views on the actions of the Avengers, prompting Stark to sign the Sokovia Accords.

"I work for the State Department. Human Resources. I know it's boring, but it enabled me to raise a son. I'm very proud of what he grew up to be. His name was Charlie Spencer. And you murdered him."
―Miriam Sharpe to Tony Stark[src]

Miriam Sharpe spent her career working for human resources at the State Department while also raising her son, Charlie Spencer. Spencer decided that he would spend his summer before beginning work as a computer programmer going overseas to Sokovia to build houses for the underprivileged living there.

However, while he was there, Ultron had a long battle against the Avengers, during which Spencer was killed when a building was dropped on top of him. Sharpe was heartbroken, but turned her pain into great anger, aimed towards the Avengers and Tony Stark, whom she held responsible for her son's tragic death.[1]

"That was nice, what you did for those young people."
"Ah, they deserve it. Plus, it helps ease my conscience."
"They say there's a correlation between generosity and guilt. But, you got the money. Break as many eggs as you like."
―Miriam Sharpe and Tony Stark[src]

Sharpe tracked down Tony Stark as he was giving a speech at the Massachusetts Institute of Technology about his new invention called B.A.R.F.. Sharpe found Stark in the downstairs corridor waiting for his elevator and commented on his recent presentation. Now engaged in conversation with him, Sharpe reached into her purse and pulled out a photograph of her son, which Stark briefly mistook as her reaching for a weapon to attack him with. Sharpe explained that her son had been killed during the Battle of Sokovia, announcing that she held Stark and the Avengers responsible for his death. Sharpe declared that the Avengers only fought for themselves while claiming to defend the people before storming into the elevator.[1] 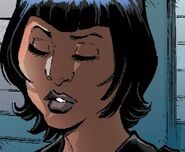