Melinda is the seventeenth episode of the second season of the television series Agents of S.H.I.E.L.D..

The story of Melinda May’s transformation into “The Cavalry” is revealed as she finds herself at a crossroads in the war between Coulson and Gonzales. As Skye learns more about her true heritage from Lincoln, the truth about the Inhumans will send her in a new direction.

Seven years ago, Melinda May was in talks with Andrew Garner about starting a family. However, she tells Phil Coulson that she is staying in the field. Their current mission involves Eva Belyakov, who is believed to possess enhanced strength. S.H.I.E.L.D. wants this woman as an asset. If Belyakov does not comply, it would be time to call in the cavalry.

In Bahrain, an attempt to reason with Belyakov goes south fast, with one person shot and several agents and a young girl kidnapped. A rescue effort ends with Coulson and May being left all alone. May convinces Coulson to send her in to save the day. This is a violation of a direct order. May gets advice from Andrew on how to approach the kidnapped girl, then enters the building. May takes down a couple of thugs but soon realizes that everyone else is being controlled by Belyakov.

In the present day, May tells Bobbi Morse that she has no idea about the Theta Protocol Coulson has initiated. She wants to try to talk him in peacefully. She lets a surprised Simmons know that her lab work has been on Deathlok technology, which is contrary to what Coulson had told her.

May wants to get to the truth, knowing Coulson does not go off the reservation unless there is a good reason. Evidence suggests that Coulson is building a base for super-powered people. He may also be recruiting Andrew to help on the psychological front. This causes May to ask Simmons to open the Toolbox.

In Afterlife, Jiaying encourages Skye to use her powers to amplify the frequency of a nearby mountain. Moments later, snow drifts fall in the form of a harmless avalanche. Skye is amazed, having literally just moved a mountain. Skye’s memories of foster care creep up after another exercise, finding it hard to believe that what is happening to her now is not going to end well. A tearful Jiaying lets Skye know that she will not be abandoned here, and reveals that she is, in fact, her mother.

Jiaying tells Skye of how people have died when the process for selection and training is ignored. She speaks of a woman who did not trust her judgment. Her name was Eva Belyakov. Everything she did was for her daughter, Katya Belyakov. This is the same little girl May desperately tried to save in Bahrain. Jiaying tells Skye that Katya was too young, and she went insane, leeching off the emotions of others with one touch. May had no choice but to stop her in a lethal way.

This tragic incident serves as the main reason no one can know Jiaying's and Skye’s true relationship. Mother convinces daughter to join her father for one dinner. Calvin Zabo is grateful for this. He tells Skye all about the day she was born. Skye is caught off-guard by the realization that she is 26 years old, instead of 25.

Back in Bahrain, May was dubbed the Cavalry after having taken out all the gangsters, Eva, and Katya. She saved many agents that day but was devastated by the one little girl she lost. This all served as the beginning of the end of her marriage and hopes of having children. Later, May asked and was accepted for transfer. She left combat duty and took a job in the S.H.I.E.L.D. bureaucracy.

In the present day, Gordon tries to assure Raina that she is not a monster. Lincoln Campbell does not want her to give up on them just yet after hearing all about her recent dream. Raina eventually agrees to let Gordon guide her. As for Lincoln, he gazes in at Skye’s dinner with her parents. The scene is identical to the one Raina described in Raina's dream, leading Lincoln to believe that Raina is clairvoyant.

At a restaurant, a man complains to his partner that their target has spent twenty minutes in the restroom and asks if there is a window in the room. He knocks, asking the target if he is going to be all day in there. The target turns out to be Leo Fitz, who says he will be out in a minute and manages to open Nick Fury’s Toolbox. He then makes contact with Coulson and Lance Hunter. He knows that he is being followed and asks for a quick lesson on how to shake a tail. Once Hunter sees that Fitz is hiding in a restroom equipped with an electric hand dryer, he knows just what to do, and tells Fitz how to escape. Coulson cannot help but let out a slight smile as he listens. 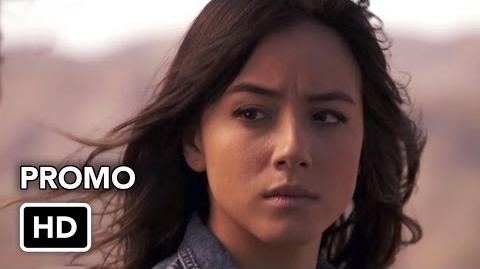 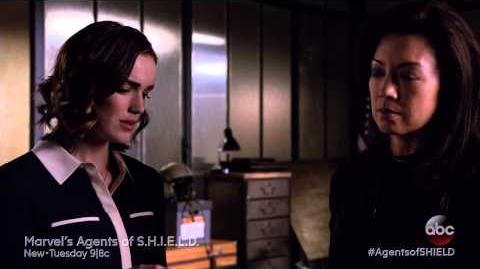 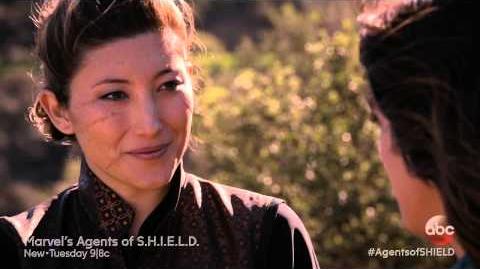 The Marvel Cinematic Universe Wiki has a collection of images and media related to Melinda.