Marvel Television was a television production company. The division was founded in July 2010, with Jeph Loeb named to head up the division.[1]

In October 2019, it was reported that Marvel Television would be moved under the Marvel Studios banner, with Kevin Feige overseeing the creative direction of the unit.[2]

In November 2019, Jeph Loeb left his post as the head of Marvel Television.[3]

In December 2019, the division was folded into Marvel Studios[4] and renamed Marvel TV Studios.[5]

Promotional image for Agents of S.H.I.E.L.D. and Agent Carter 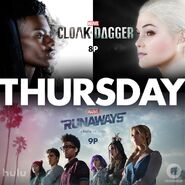 Retrieved from "https://marvelcinematicuniverse.fandom.com/wiki/Marvel_Television?oldid=1098662"
Community content is available under CC-BY-SA unless otherwise noted.