"I guess I'm just taking a break. This is very different, but y'know, life is about new experiences, and this certainly is one of them."
―Thor

Team Thor: Part 2, also known as Where Are They Now?, is a follow-up of the self-parody mockumentary-style short film Team Thor: Part 1. It is the seventh in a series of Marvel One-Shots, released on the Doctor Strange Blu-ray.

The short film was written and directed by Taika Waititi.

Thor talks to a class about a gruesome battle he experienced while the teacher smiles along. Darryl cleans while while Thor talks about how he shares cleaning responsibilities with his housemate, Darryl Jacobson, and Jacobson says that he does most of the work. Thor and Jacobson play Connect Four, so Thor summons Mjolnir and breaks the game. Jacobson talks about how he is short-tempered and explains that the game has been in family for a long time, but that he does not feel he can share that with Thor.

Thor attempts to give Asgardian items to Jacobson as a form of rent, and Jacobson says that it is not sufficient despite Thor's insistence. Jacobson asks Thor to get a job, and Thor laughs and says that being a superhero is his job, making for of Jacobson's job and lack of muscle. Jacobson tries to keep the conversation focused on rent, but Thor instead decides to get a servant and leaves. Jacobson expresses his frustration about the conversation.

Thor interviews Shane to be a servant, telling him that he would have to polish Mjolnir, clean his armor after battle, sharpen his swords, write his tales, and get a job so that he can pay Thor's rent. Thor offers to pay Shane in Asgardian gold, and Shane agrees to the offer. Thor hires Shane and tells him to get mead for him. Jacobson describes Thor as an illegal alien, saying that he dreads the day he is asked to show his passport.

Thor returns to the school and tells the class about the Avengers, who he says used to be friends before a disagreement led them to stop talking. He cries about how nobody called Thor to participate in the conflict, and tells the class that friendships end and nothing lasts. Thor says that he and Jacobson are alone and can form their own, and jokingly says that Jacobson should get a superhero outfit. He offers Jacobson Mjolnir before pulling it away, and suggests that Jacobson would never be able to lift the hammer. 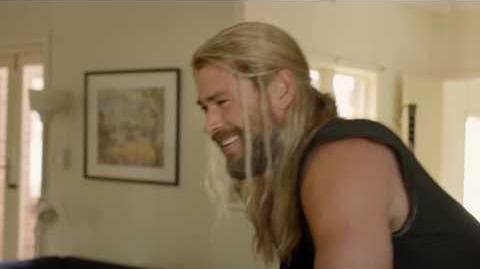 The Marvel Cinematic Universe Wiki has a collection of images and media related to Marvel One-Shot: Team Thor: Part 2.