"Well, if they'd wanted to make me feel useful, they wouldn't have made me work with you."
―Peggy Carter to John Flynn

Agent Carter is the fourth in a series of Marvel One-Shots, released on the Iron Man 3 Blu-ray. It takes place after the main events of Captain America: The First Avenger.

The short film was directed by Louis D'Esposito from a screenplay by Eric Pearson.

In the year 1946, Peggy Carter works in data analysis and code-breaking for the Strategic Scientific Reserve, under John Flynn's command. The SSR investigates the case of the Zodiac serum, but Flynn refuses to allow Carter to join, believing that Carter is not competent enough. One night, Flynn and the other agents go out for drinks, leaving Carter to clean up the office when the hotline rings. The caller directs her to the location of the Zodiac and suggests to assign a team of 3-5 agents on the mission.

Instead, Carter goes alone, carrying a tricked out briefcase with her. At her location, she attacks two goons throwing one through the window. The third guard she handcuffs to a pipe and tells him to scream for help. When two further heavies arrive she ambushes them. Finally, she locates the room where Zodiac is – throwing in a smoke bomb to lay out what she thinks is the final guard before finding the vial marked with a strange symbol. There is one last heavy – the biggest yet, decked out in a gas mask. The two battle until Carter looks finally beaten when, at the last moment, she slips a knife from her briefcase and stabs him.

Back at the office, Flynn disciplines Carter for insubordination until the phone rings. It is Howard Stark. Stark says the mission was more a notch in Carter’s belt than a feather in her cap and informs Flynn that Carter is to run S.H.I.E.L.D. with Stark. Flynn is to inform Carter and ‘let her know you’re honored to bring her the news’. Carter rebukes his offer to carry her things out of the office. Stark sits by a swimming pool, together with Dum Dum Dugan. They discuss bikinis – Dugan asks Stark if he invented them and he says no, it was the French. 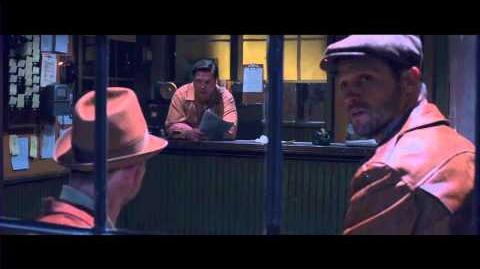 The Marvel Cinematic Universe Wiki has a collection of images and media related to Marvel One-Shot: Agent Carter.
Community content is available under CC-BY-SA unless otherwise noted.
Advertisement