"Undercover is all about the relationships you make. If you're gonna move up in HYDRA, you need to make friends."
―Phil Coulson to Jemma Simmons

Making Friends and Influencing People is the third episode of the second season of the television series Agents of S.H.I.E.L.D..

Coulson and his team race against HYDRA to get to Donnie Gill--a dangerous gifted with the ability to freeze objects--while Simmons is caught in the crossfire.

Daniel Whitehall pours himself a drink. He says the first time he drank it was when he first enlisted. It was bland and immature, but has increased with value over time. He is talking to a S.H.I.E.L.D. agent named Agent 33 who is hooked up to a device that is holding her eyes open while she stares at a screen of hypnotic shifting shapes. He speaks to her in a hypnotic tone, inviting her to submit. She refuses and he says they will start over.

Jemma Simmons wakes up and gets ready for work. She walks there, having a happy, normal day and dropping her fast food breakfast in the trash. She is greeted by a security guard named Theo at the door. She goes down to a lab where another man greets her, noting that she is early, and brushes her off. She looks up at the HYDRA insignia is on the wall.

Agent Melinda May trains Agent Skye in control. She scolds her for thinking of Ward when she fires her gun, but gives her credit for keeping her heartbeat steady. Alphonso Mackenzie and Lance Hunter show up, Hunter questions Skye's credibility as an agent, having not gone to S.H.I.E.L.D. Academy. He asks if she has ever killed anyone which she has not. May tells Hunter to beat it, and reassures Skye that experience only goes so far. Coulson shows up and tells May that HYDRA got Agent 33.

Simmons' boss is breathing down her neck, saying he has been called upstairs and need her results. She says something about cells creating trace amounts of liquid nitrogen. She recognizes Donnie Gill in the file her boss is holding. Simmons returns home and hears someone else inside. She pulls a gun out of her purse while turning the corner to find Phil Coulson. Coulson mocks her empty kitchen. She mentions that maybe their dead drop should not involve fast food. He had brought groceries and offers to cook while she debriefs. Simmons tells Coulson about Gill, how he must have some kind of powers and hypothesizes about the storm machine being struck by lightning. She has no solid info because she is being kept sequestered. He tells her to make relationships and she says she cannot be Ward. She asks how everyone is, and Coulson says Fitz is fine. Coulson thinks they must be trying to recruit Gill. He debriefs his team. He wants to bring Gill in before HYDRA can. He asks Leo Fitz for help, since Fitz knows him best. He struggles to speak, but with Mack's help says Gill has trouble making friends.

Meanwhile, Gill sits at a cafe. He gets in a disagreement with the owner and then freezes him. Two men in suits show up. He freezes one and the other runs off. He takes the Lead HYDRA agent's phone and leaves.

Skye tries to get info from Grant Ward. Ward says he was never loyal to HYDRA, only to John Garrett. He says his family tore him down and that Garrett built him up as he wanted. He says every family has its secrets, including Skye's, but she cuts him off. He tells them about HYDRA's protocol as it concerns the "gifted", which is recruit or kill. He says this amorality is why HYDRA will win.

Simmons tries to make friends at the HYDRA Laboratories. Her boss says she is wanted upstairs for questioning on a security matter. Two men come to escort her up. She goes up an elevator and is lead to a conference room where Sunil Bakshi is waiting and accuses her of lying. He starts to grill her, calling her out for not informing her supervisor that she knew the subject of Project Blizzard. She covers by saying she did not know who the subject was until yesterday, which is true. She goes on to say she barely knew Gill. Bakshi asks if she is loyal to HYDRA. Simmons says she is loyal to science, so as long as those loyalties match up, she is loyal to HYDRA. Meanwhile, Whitehall continues his reeducation of Agent 33. Bakshi asks for his help, but Whitehall says he trusts him to make the decisions.

Donnie stands near a freighter on a dock and freezes the water. Coulson and the team hear about the frozen ship in the sea. They prepare to leave on the Bus. Mack suggests that he and Fitz play Xbox with their free night, but Fitz is upset because he is not going on the mission. Lance Hunter and Skye get ready to jump out of the Bus with Melinda May. They move out.

Simmons' escorts bring her to a team gathered by Bakshi, who are going out to find Gill. She will go with them. On the ship, Gill says to a shipman that he is going to make an example to HYDRA to get them to leave him alone, and then freezes him. Bakshi gives Simmons a communicator and says he will be in her ear. She goes in. Simmons searches the ship for Gill. Gill shows himself, and asks what side she is on. She says his side. Bakshi tells her to convince him. Coulson's team moves in, taking out a couple of HYDRA soldiers.

Fitz is talking to his imaginary Simmons. She tells him he is being paranoid and to stay out of wherever he is going, but he says she is not really here and she is gone. He enters the closed cell and sees Ward who says it is good to see him. Fitz looks at him in shock. Ward tries to explain himself to Fitz, saying that John Garrett expected him to shoot Fitz and Simmons in the head but he gave them a chance to find a way out. He explains what Ward did to him and starts draining the oxygen from Ward's cell. He spills that they are going to find Donnie Gill, and Ward says they do not know what they are walking into. Mack is playing Xbox when Fitz runs in and tells him they have to find the Bus.

Simmons continues to try to talk down Gill. He starts getting angry, and Bakshi starts telling Simmons lines to say. She begins saying them and Gill looks groggy. Mack radios Coulson and tells him that Fitz is saying Gill was brainwashed by HYDRA. Coulson orders the field team to stop HYDRA from talking to Gill. Hunter lines up a shot on someone who he doesn't know is Simmons. Agent May wounds Hunter to stop him. Alerted, Gill runs and everyone gives chase. Coulson orders they maintain Simmons' cover. Gill runs into Bakshi, who speaks the brainwashing code and Gill falls under his sway. He covers their trail by freezing the door as they leave. Bakshi orders Gill to freeze the ship, and that no one left inside should leave alive. Hunter and May realize they are trapped. Skye shoots Gill, who falls into the ocean. Skye fakes a shot on Bakshi, allowing Simmons to pretend to save him. They leave, leaving the cargo on the HYDRA ship for S.H.I.E.L.D. to take.

Hunter makes good with May. Skye is monitoring channels, and nobody has found Gill's body. Skye tells May that she does not understand why Coulson did not tell anyone else about Simmons and that she is worried. May says she can handle it. Coulson goes to talk to Fitz. He reminds Fitz that he is still an important part of the team, but saw what he did to Ward. Fitz says he is not a killer. Coulson explains that he hates Ward, but needs to know more about HYDRA. Fitz says Coulson should have told him. Coulson says there is a lot more he is hiding, but Simmons is on assignment and that is why she has made no contact.

Whitehall tells Bakshi that S.H.I.E.L.D. is becoming a problem and he wants to know who is in charge. Agent 33 walks in with a file for Whitehall, and says she is happy to comply. Bakshi asks for authorization to bring Simmons from the lab. He says he trusts her but if he is wrong they will make her comply.

Skye goes to see Ward. She asks about the brainwashing. He says it is mostly used on high value targets. She asks if it was used on him. He says he wishes he could say it was, but he promised to never lie to Skye, so he tells her it was never used on him. She says she does not know what he hopes to achieve with all of this. Ward says he knows something and he wants her to believe him when he says it. He tells her that her father is alive, that he is looking for her, and that someday he will take her to him, if she lets him. She says they are done and leaves. Outside, Skye's heart beats out of control. 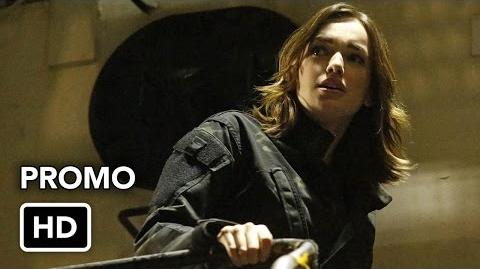 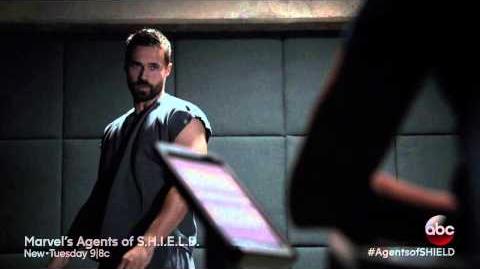 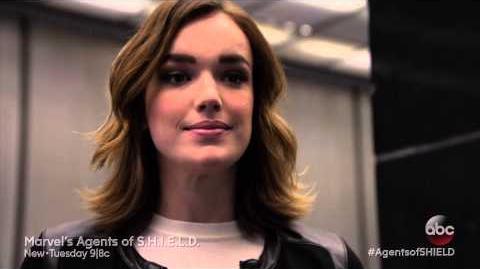 The Marvel Cinematic Universe Wiki has a collection of images and media related to Making Friends and Influencing People.