"The Reich shall win because we are unified. In blood as in purpose. While our enemies... are the polyglot peasants of Europe and the mongrel masses of North America."
―Lohmer[src]

Colonel Lohmer was a high ranking officer of HYDRA during World War II.

"You know why the Reich is destined to win this war, corporal?"
"Surely the advanced weapons developed here by HYDRA will turn the tide in our favor, Colonel Lohmer."
―Lohmer and the HYDRA Unterscharführer[src]

In October 1943, Lohmer was the commanding officer of a secret HYDRA weapons facility in the Austrian Alps, located halfway between Kitzbühel and Klagenfurt. There, Lohmer mercilessly beat Bucky Barnes when he failed to work efficiently. Lohmer was then killed in an "accident" by Barnes' cellmates.[1] 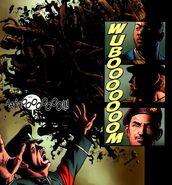