Marvel Cinematic Universe Wiki
Register
Don't have an account?
Sign In
Advertisement
in: Article stubs, Characters, The Falcon and The Winter Soldier Characters,
and 11 more

The Falcon and The Winter Soldier (5 episodes)

"We can't stay here for long. Six months ago, would you have imagined people supporting the cause like this?"
―Lennox to Flag Smasher[src]

Lennox was a super soldier and a member of the anti-patriotism group known as the Flag Smashers.

"One world."
"One people."
―Matias and Lennox[src]

Raid of the GRC Supply Depot

"They're just sitting on this stuff."
―Lennox[src]

Raid of the Resettlement Camp

"Stay there."
―Winter Soldier to Lennox[src]

Attack on the GRC

Lennox accompanied Karli Morgenthau and the other Flag Smashers to New York City to target the GRC New York Headquarters to stop the Patch Act. Lennox was tasked with overseeing the transportation of the GRC members. Pretending to be a GRC employee, Lennox ushered members inside an armored truck and locked the door with a device. He then walked back to his van only to be bumped into Sharon Carter.

Carter apologized, while planting mercury vapor on Lennox, however, he remained unaware. After Carter had walked away, Lennox hopped into his van and then crashed into a car in front of him, as the acid burned his skin off of his face, and he died due to the acid exposure.[1] 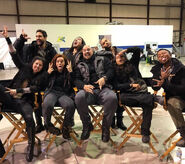