The Lem are a red-skinned sentient race that populate the galaxy.[1]

Krugarr, a Lem skilled in the art of sorcery, joined the Ravagers and became the leader of one of the clans of the criminal group.[2]

The Lem have many reptilian features, including a red scaled skin and a serpentine tail. They also don't have a visible mouth, and are apparently not capable of speech. Some Lem like Krugarr are capable in the art of the Eldritch Magic, and use these abilities to communicate non-verbally with other sentient beings. 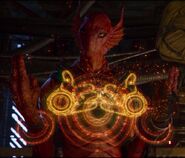 Krugarr
Add a photo to this gallery

Retrieved from "https://marvelcinematicuniverse.fandom.com/wiki/Lem?oldid=1151551"
Community content is available under CC-BY-SA unless otherwise noted.