"What's the Labyrinth?"
"It's a top-secret S.H.I.E.L.D. vault. Only the Koenigs know its location."
―Daisy Johnson and Phil Coulson[src]

The Labyrinth was a secret S.H.I.E.L.D. vault located at Pleasant Hill Public Library. It was used by S.H.I.E.L.D. to hide the Darkhold but was eventually found and compromised by the Watchdogs.

"It was Operation Hot Potato. Pass it back and forth, keep it moving. Billy was the last to have it. So my guess is, he put it in the Labyrinth."
―LT Koenig[src]

The Labyrinth was a S.H.I.E.L.D. secret storage facility hidden in a seemingly normal library. Only the Koenig siblings, Billy, Sam, Eric and LT knew its location and the different codes and manipulations required to open the vaults.

After S.H.I.E.L.D. reclaimed the Darkhold, Phil Coulson entrusted it to the Koenigs, who passed it back and forth between them and ultimately locked it inside the Labyrinth.[1]

"The Labyrinth is compromised. The deadliest tome in the world is in the hands of a mad scientist, who snuck out of the back door with cattle-prod man. I'm sorry, we let you down."
―Billy Koenig to Phil Coulson[src]

After Billy Koenig was kidnapped, S.H.I.E.L.D. feared that Holden Radcliffe and the Watchdogs could reclaim the Darkhold from them. They went to the Labyrinth to secure the grimoire. Sam Koenig then retrieved it and had handed it over to Phil Coulson. However, the Watchdogs assaulted the place while Melinda May's Life-Model Decoy rebelled against Coulson and tried to steal the Darkhold. A battle ensued and although S.H.I.E.L.D. defeated the Watchdogs and saved Billy, Radcliffe managed to take the Darkhold. As the facility had been found by the criminal organization, the Labyrinth was considered compromised and could no longer be used to store dangerous objects.[1] 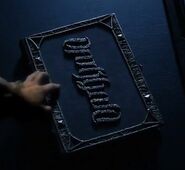 Darkhold
Add a photo to this gallery

The Marvel Cinematic Universe wiki has a collection of images and media related to Labyrinth.
Retrieved from "https://marvelcinematicuniverse.fandom.com/wiki/Labyrinth?oldid=1213646"
Community content is available under CC-BY-SA unless otherwise noted.