The Guardians of the Galaxy Holiday Special (unreleased)

"His people are completely literal. Metaphors are gonna go over his head."
"Nothing goes over my head. My reflexes are too fast. I would catch it."
―Rocket Raccoon and Drax the Destroyer[src]

Kylosians[1] are a warrior race native to the planet Kylos.

Knowledge of Kylosian culture is scarce, but Rocket has stated that they are a completely literal people who do not use metaphors.[2] Drax has also mentioned that their villages host war rallies and his people have fewer "hang-ups" than humans, as Drax has mentioned how his father would tell the story of impregnating his mother every winter solstice, which he found to be beautiful.[3] However, they are a fierce race who follow a tribal culture.

Their home planet Kylos was attacked by Thanos as a target of his campaign to balance the universe. Thanos' armies led by Ronan the Accuser attacked Kylos and murdered half of the Kylosian population.[4]

Drax, a Kylosian survivor of Thanos' genocide in Kylos, sought revenge for the death of his wife and daughter. He became an intergalactic criminal and ended up in the Kyln prison, where he allied with Star-Lord, Gamora, Rocket Raccoon and Groot, forming the Guardians of the Galaxy.[2]

Kylosians are a species very similar to humans in appearance, but possess enhanced levels of strength and superhuman durability due to their thick and dense skin.[5] They appear to have murky green skin tones, highlighted by intricate red markings across their faces and bodies.

They are known as a warrior and literal race, as they are almost incapable of understanding the metaphors.[2] 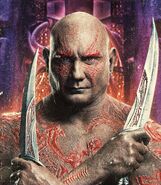 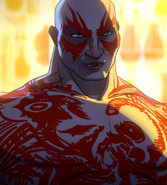