Kronans are an ancient race of rock-like humanoid beings.

In 2013, one Kronan warrior was a member of the Marauders, and was present during the battle against the Asgardians on Vanaheim. The warrior attempted to duel Thor, but was destroyed with a single uppercut from Mjølnir.[1]

In 2014, two Kronans were fighting on Ria when the Quadrant passed by, catching their attention.[2]

"I tried to start a revolution, but didn't print enough pamphlets. So hardly anyone turned up, except for my mum and her boyfriend, who I hate. As punishment, I was forced to be in here and become a gladiator."
―Korg to Thor[src]

Korg, a Kronan, attempted to begin a revolution on his home world. However, no one except for two other people showed up, causing the revolution to fail. As punishment for his attempt to overthrow the government, he was exiled to Sakaar and forced to become a gladiator in the Grandmaster's Contest of Champions.[3]

Killed by the Collector

"Packs quite a wallop, does it not? I hacked it off the carcass of a terribly chatty Kronan."
―Collector to Star-Lord[src]

In an alternate universe, the Collector had hacked off the arm of a Kronan and killed him. He used it as a weapon against escapees from his collection, including T'Challa.[4]

"I'm made of rocks, as you can see. But don't let that intimidate you. You don't need to be afraid unless you're made of scissors."
―Korg to Thor[src]

Kronans are tall humanoids that tower over other races such as Asgardians and Vanir. Much of their body's epidermis is composed of highly durable rocks that provide them superhuman strength and allow them to withstand many attacks. Because of this, Kronans eschew most forms of armor in battle. 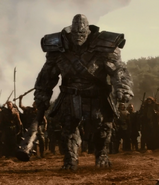 The Marvel Cinematic Universe Wiki has a collection of images and media related to Kronans.