"How did you get that Kreeper's axe?"
―Deke Shaw to Yo-Yo Rodriguez[src]

The Kree Battle Axe is a weapon commonly used by the Kree.

Thousands of years ago during the capture of a Mayan hunter-gatherer who would later become the Inhuman known as Hive, one of the Kree Reapers had a battle axe as his weapon of choice.

Thousands of years later, after Hive sent out a signal using a Kree Orb, a Kree Reaper killed Alisha Whitley and a couple of HYDRA agents using a battle axe. He also uses it in a fight against Daisy Johnson and loses. Another Kree Reaper uses a battle axe to fight Hive but he's disarmed and killed by the later.[1]

90 years into the future, the Battle Axes were used as melee weapon by the Kree Watch on the Lighthouse. Alphonso Mackenzie used a Battle Axe to kill a Kree Captain after escaping his torture.[2]

When Kasius met with Mackenzie and Yo-Yo Rodriguez to negotiate their surrender, Hek-Sel and another Kree guard combined their Battle Axes to create an invisible energy barrier which blocked Rodriguez while she was moving at full super-speed and protected the Kree from an explosion.[3] 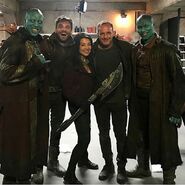 Retrieved from "https://marvelcinematicuniverse.fandom.com/wiki/Kree_Battle_Axe?oldid=1162821"
Community content is available under CC-BY-SA unless otherwise noted.