Luke Cage
*They Reminisce Over You (T.R.O.Y.)

"King's Paradise" is a song recorded and performed by Rakim and written by William Griffin, Adrian Younge and Ali Shaheed Muhammad for the television series Luke Cage. It was released on June 22, 2018.[1]

Welcome to Harlem, the home of innovating
Legacies and stories of Gods killing Satan
Where they honor Harlem's father Philip Payton
The renaissance in the making
Ellington, Garvey, Joe Louis, Lena Horne
Malcolm, Maya, Louis Armstrong
But now crime is the new crave
So it's a new crusade, so salute to Luke Cage
Fight for the cause
All the way to the top, rivalry wars, life can be lost
No type of remorse
Forward always for Pop, until the crown is rightfully yours
But success brings sacrifice
And no one was at stake, the pressure could crack a pipe
Where everything has a price
But you pay with your life in the King's Paradise

His story is complicated
He got framed for a crime and incarcerated
Locked up his alter ego
Experimented on, nothing but superhero skills
But everyday, he get twice as strong
Bulletproof skin but his life is torn
The only lady he ever loved in his life is gone
Escaped prison, got to fight to right his wrong
No question, he gon' take on the whole hood in a hoodie
No weapons, and no cape on
One by one and knock 'em out
Until Cottonmouth is forgot about
But success brings sacrifice
And if you thinking it's a piece of cake, you can have a slice
It's like gambling with a pair of dice
But you can pay with your life in the King's Paradise 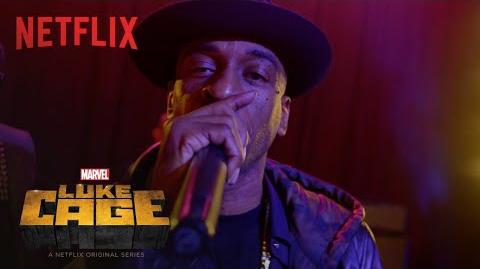 Retrieved from "https://marvelcinematicuniverse.fandom.com/wiki/King%27s_Paradise?oldid=795124"
Community content is available under CC-BY-SA unless otherwise noted.