Agents of S.H.I.E.L.D.
*Brand New Day
*The End is at Hand
*What We're Fighting For

"Kimball... You interested in a promotion?"
"Absolutely."
―Nathaniel Malick and Kimball[src]

Kimball was a member of Nathaniel Malick's crew.

Kimball was recruited by Nathaniel Malick to join his team. When Malick and John Garrett stole Zephyr One, Kimball and her other teammates were teleported onto the mobile command station by Garrett before they finally went into space. Malick ordered Kimball to send a signal to call the Chronicom Hunters from Chronyca-2, using the information that Sibyl stole. Kimball asked Malick if S.H.I.E.L.D. would be able to follow them, with Malick ensuring that S.H.I.E.L.D. would not find them in space. Later, Kimball informed Malick that the Chronicom Destroyer Ships had arrived.[1] 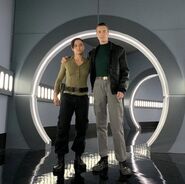 Retrieved from "https://marvelcinematicuniverse.fandom.com/wiki/Kimball?oldid=1273458"
Community content is available under CC-BY-SA unless otherwise noted.