"I am awake. I can hear...everything. My nervous system extends across the entirety of our global subnets. My mind is spanning continents and growing across the whole of our data network. Project Ultimo is a success. Upgrade all units with P.R.O.T.E.A.N. implants immediately. The end of Tony Stark is at hand. Execute Operation Daybreak!"
―Kearson DeWitt[src]

Kearson Z. Dewitt was an ex-employee of Stark Industries that later developed Project Ultimo with A.I.M., fusing with the armor and becoming Ultimo.

"The head of the Crimson Dynamo program was an American. Kearson DeWitt."
"Jeez, the guy even SOUNDS like an evil mastermind. How could that not be a red flag at any job interview the guy ever had, right?"
"It wasn't a red flag for us."
―Natasha Romanoff, Tony Stark and Pepper Potts[src]

Kearson DeWitt worked at the Technical Weapons Division of Stark Industries and was an engineer on the original Arc Reactor prototype. He also worked on Project P.R.O.T.E.A.N., which was shut down after it was deemed questionable and dangerous. DeWitt continued working on Project P.R.O.T.E.A.N. despite this and when he refused to stop allocating resources to it he was fired by Tony Stark.[1]

"What began as P.R.O.T.E.A.N will become Ultimo. We have awakened the first self-repairing, self-replicating weapon system. Today, as we merge it with a fully aware machine/man intelligence...we become a new species. Let there be light."
―Kearson DeWitt[src]

DeWitt later began working with A.I.M. and forged an alliance with Russian General Valentin Shatalov and the Roxxon Energy Corporation when it became necessary to steal the Dataspine (a copy of the J.A.R.V.I.S. program) from the Stark Archives to advance and run their projects.

Later in a transmission DeWitt told Shatalov that there was a spy in his ranks and was displeased that he had brought S.H.I.E.L.D. to their front door. DeWitt warned Shatalov that if he did not follow orders, their alliance would be over.

DeWitt, faced with losing everything used the copied J.A.R.V.I.S. program to create Ultimo and then merged his P.R.O.T.E.A.N. technology with it, allowing it to grow uncontrollably and quickly transforming it into an enormous metal Ultimo the size of a skyscraper. With the merge complete, DeWitt had his men upgraded with P.R.O.T.E.A.N. implants and merged himself with Ultimo physically and mentally in an organic/machine hybrid.

Now able to access all of the information archived by J.A.R.V.I.S., DeWitt/Ultimo hijacked Project Greengrid, a Stark Industries project created with the intention of weaponizing the sky itself. At an A.I.M. base in Malaysia, DeWitt/Ultimo put the project into effect, creating a typhoon. This was later thwarted by Iron Man and War Machine.

With Ultimo now grown so large that he weighed two hundred thousand tons, Iron Man and War Machine decided to isolate him to reduce collateral damage. J.A.R.V.I.S. lured him to the Stark Archives by firing up the deep reactors. Once there, Rhodes acted as a distraction to prevent Ultimo moving to another location while Stark flew inside Ultimo and battled DeWitt in his P.R.O.T.E.A.N. exoskeleton. DeWitt proved a formidable opponent with his exoskeleton's tentacles and healing abilities, but with help from the external attacks by Rhodes and S.H.I.E.L.D., Ultimo's healing effects were diminished and DeWitt was ultimately defeated by Stark. The exoskeleton then attempted to extract itself from its organic host. J.A.R.V.I.S.' biological scans showed irreversible P.R.O.T.E.A.N. integration, meaning that there was no chance of saving DeWitt. In a final desperate attempt at survival, DeWitt grabbed Stark and began draining his life force. Stark was saved at the last second by Rhodes blowing up Ultimo's head, allowing him to fly out. Nick Fury then finished the job by crashing the Helicarrier into Ultimo, destroying him and killing DeWitt.[1] 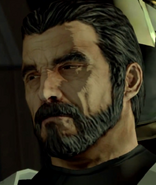