Doctor Strange
Avengers: Endgame
Shang-Chi and the Legend of the Ten Rings
Spider-Man: No Way Home
Doctor Strange in the Multiverse of Madness

What If...?
*What If... Doctor Strange Lost His Heart Instead of His Hands?

"I went to a place called Kamar-Taj and I talked to someone called the Ancient One, and..."
"Oh. So you joined a cult."
―Doctor Strange and Christine Palmer[src]

Kamar-Taj is the home and training grounds to the Masters of the Mystic Arts, located in Kathmandu, Nepal.

"You came to be healed, as did we all. Kamar-Taj is a place that collects broken things. We all come with the promise of being healed, but instead, the Ancient One gives us parlor tricks."
―Kaecilius[src]

Kamar-Taj was founded as a place for sorcerers and sorceresses to train and control their powers. People often come here after being broken or damaged, physically and psychologically. Once they are healed from their wounds, they are allowed to choose between joining the Masters of the Mystic Arts or returning to their previous lives.[1]

"No knowledge in Kamar-Taj is forbidden. Only certain practices. Those books are far too advanced for anyone other than the Sorcerer Supreme."
―Wong[src]

Kamar-Taj also houses spellbooks that have dangerous spells. Despite this, the warnings come after the spells rather than before, a common practice in the rest of the world. This can cause sorcerers to practice spells without knowing the risks and costs.[1]

"The place you're looking for is called Kamar-Taj. But the cost is high."
―Jonathan Pangborn[src]

Following his car accident and the subsequent nerve damage suffered in his arms, Dr. Stephen Strange exhausted most of his wealth and sought out various medical procedures in an attempt to fix them, only to be told that it was impossible. After hearing from a counselor that a man named Jonathan Pangborn also received a similar injury and recovered completely from it, Strange sought out to find Pangborn and discover how he had done so.

During their encounter, Pangborn revealed that he had gone to a place known as Kamar-Taj in Kathmandu where his mind learned to heal what his body could not. Although Strange was skeptical, he used the last of his funds to travel to Nepal in a last-ditch effort to be healed from his affliction.

Once there, Strange was met by the Ancient One and Karl Mordo, who both took their turns to train him to become a Master.[1]

"Do you remember the full moon party at Kamar-Taj?"
―Doctor Strange to Wong[src]

At some point, a party was held at Kamar-Taj when it was full moon and Doctor Strange cast the Runes of Kof-Kol to make every sorcerer forget about the party except himself.[2]

In 2023, Masters of the Mystic Arts arrived from Kamar-Taj via portals to join the battle against an alternate Thanos and his forces.[3] Wong, the new Sorcerer Supreme, continued to use portals from Kamar-Taj on a regular basis.[2]

"The first time you used the rings, we felt it in Kamar-Taj."
―Wong to Shang-Chi[src]

In April 2024, Wong brought Shang-Chi and Katy Chen to Kamar-Taj to discuss Xu Wenwu's rings with Carol Danvers and Bruce Banner via holographic call. Wong told them that the Ten Rings issued a beacon to a location unknown when Shang-Chi had used them.[4]

"What happened?”
“Kamar-Taj has fallen."
―America Chavez and Doctor Strange[src]

In 2025, Wong brought America Chavez, a supernatural being from an alternate universe in the Multiverse, to Kamar-Taj. Additionally, Rintrah, another being from another universe had taken residence there for training. Doctor Strange met them there and informed about Wanda Maximoff and the Darkhold. Wong, understanding the urgency, ordered that all students stop being trained and Kamar-Taj be set up as a fortress.

As the Masters of the Mystic Arts got into position and put up mystical barriers, they were joined by the Hong Kong Master and London Master. They all then watched as dark clouds filled the atmosphere, covering Kamar-Taj in darkness. Maximoff, in her Scarlet Witch form, appeared and Strange flew up to speak with her. She expressed her frustration with their attempts to stop her and how she had sacrificed everything for it to mean nothing. She told Strange she had been patient long enough and sent out a hex blast, only for it to be contained within the barrier. Strange returned to stand beside Wong, as Maximoff flew around the perimeter.

Evebtually, Maximoff used her telepathy and astral form to cause a student to let his shield down and allow her to break the barriers. She then blasted archers off of rooftops and destroyed the artillery. Maximoff toppled buildings and created fires throughout the courtyards, destroying Kamar-Taj’s foundations. Strange and Wong told everyone to fall back and rushed to safety.

Inside a remaining building, Strange set up a trap for Maximoff, temporarily trapping her in the Mirror Dimension. He tended to Chavez and told her they needed to leave. However, Maximoff used the reflections within to remove Hamir and another Master from the room. Strange and Wong noticed this and covered up the reflective surfaces, but Maximoff managed to break free through a gong. She told them that all she wanted was her children and summoned the Darkhold. She revealed to them her children living happy lives throughout the Multiverse. When Strange asked what would happen to her alternate self, she didn’t say anything, leading Strange to go on the defensive. She easily knocked him aside and began to drain Chavez from her powers. When Wong tried to stop her, she knocked him out. Strange then rescued Chavez and together they fell through her portal out of their universe.

Maximoff used her magic to restrain Wong outside and used the Darkhold to engage in dreamwalking. As she did, Sara Wolfe came and destroyed the Darkhold, but was burnt to death as a result. Maximoff became frantic and demanded Wong to help her find another. When he didn’t, she threatened to kill Rintrah and other Masters. He told her that the Darkhold was a copy and the original text was on Wundagore Mountain. Maximoff then released them and stole a Sling Ring, so Wong could take her there. He opened a portal and they left Kamar-Taj.[5]

Later, America Chavez opened a portal to Kamar-Taj and she and Wong returned there. Wong tasked the surviving Masters of the Mystic Arts to begin rebuilding Kamar-Taj and cleaning the destruction. Chavez opted to stay there and be trained as a Master. When Doctor Strange came, he and Wong expressed how grateful they were to have each other and as Strange opened an Inter-Dimensional Portal to leave, Chavez told him she was happy she fell into their universe.[5]

In an alternate universe where Christine Palmer died, Stephen Strange trained to become a member of the Masters of the Mystic Arts at Kamar-Taj.[6] 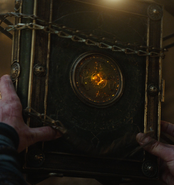 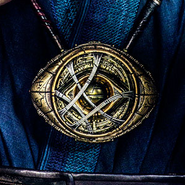 The Marvel Cinematic Universe Wiki has a collection of images and media related to Kamar-Taj.