Iron Man: I Am Iron Man!

"Is it cool if I take a picture with you?"
―Jimmy to Tony Stark[src]

Jimmy was an airman of the United States Air Force.

After Tony Stark demonstrated the Jericho in Afghanistan for the United States Air Force, Jimmy along with Pratt and Ramirez were assigned to escort him back to Bagram in a Humvee convoy. During the trip, the convoy was attacked by members of the Ten Rings to kidnap Stark. He was killed by an explosion as he exited the Humvee.[2] 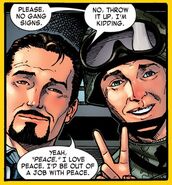 Retrieved from "https://marvelcinematicuniverse.fandom.com/wiki/Jimmy_(Airman)?oldid=1000979"
Community content is available under CC-BY-SA unless otherwise noted.