Obliterated by Ultron and remaining program codes uploaded into Vision

Started out, J.A.R.V.I.S. was just a natural language UI. Now he runs the Iron Legion. He runs more of the business than anyone besides Pepper.Tony Stark to Bruce Banner

Over time, he was upgraded into an artificially intelligent system, tasked with running business for Stark Industries as well as security for Tony Stark's Mansion and Stark Tower.

After creating the Mark II armor, Stark uploaded J.A.R.V.I.S. into all of the Iron Man Armors, as well as allowing him to interact with the other Avengers, giving them valuable information during combat.

During the Ultron Offensive, J.A.R.V.I.S. was destroyed by Ultron, although his remaining programming codes unknowingly continued to thwart Ultron's plans of gaining access to nuclear missiles. His remains were found by Stark, who uploaded them into a synthetic body made of vibranium and, in conjunction with Ultron's personality and an Infinity Stone, an entirely new being was made: Vision. J.A.R.V.I.S.' duties were then taken over by F.R.I.D.A.Y..

I have no desire to spend the rest of time as a disembodied voice.Edwin Jarvis

Tony Stark designed a natural language user interface program which he named J.A.R.V.I.S., after his late butler, Edwin Jarvis.[1] Over the years, Stark improved and perfected the system, adding security protocols and eventually upgrading the U.I. into an A.I. system. Now artificially intelligent and programmed to aid Stark, J.A.R.V.I.S. was tasked with operating Stark's mansion as well as handling business for Stark Industries.[2]

Following his return from captivity, Tony Stark sought J.A.R.V.I.S.' aid to design and create the Iron Man Armor: Mark II, as well as to run tests and simulations. Following the successful creation of the suit, J.A.R.V.I.S. was uploaded into the system's computer, and ran diagnostics on as the suit's status as well as atmospheric and environmental conditions. With the creation of the Iron Man Armor: Mark III, J.A.R.V.I.S. was uploaded into every iteration of the armor and was tasked with aiding Stark in combat.[3]

Query complete sir. Anton Vanko was a Soviet physicist who defected to the United States in 1963. However, he was accused of espionage and was deported in 1967. His son, Ivan, who is also a physicist, was convicted of selling Soviet-era weapons grade plutonium to Pakistan, and served fifteen years in Kopeisk prison. No further records exist.J.A.R.V.I.S. to Tony Stark

J.A.R.V.I.S. continued to assist Tony Stark in his Iron Man identity, giving him advice on the armor's status and on the enemy's weak points during his battle with Whiplash in Monaco. He helped Stark in creating a new element as a substitute for the obsolete palladium for the Arc Reactor, studying Howard Stark's notes and aiding him in his experiments. He helped Iron Man and Black Widow to track Ivan Vanko's signal when he was controlling Justin Hammer's drones.[4]

Sir, we have more incoming."
"Fine. Let's keep them occupied.J.A.R.V.I.S. and Iron Man

While Tony Stark was on a date with Pepper Potts, J.A.R.V.I.S. informed him that S.H.I.E.L.D. agent Phil Coulson wanted to meet with him. Stark told J.A.R.V.I.S. to get rid of Coulson, but this failed when Coulson overrode J.A.R.V.I.S.' system. Later, on the S.H.I.E.L.D. Helicarrier, Stark had J.A.R.V.I.S. hack into S.H.I.E.L.D.'s computers, and discovered that S.H.I.E.L.D. planned to use the Tesseract to create weapons. J.A.R.V.I.S. saved Stark when Loki threw him from Stark Tower by deploying the Mark VII armor. J.A.R.V.I.S. gave Stark help and advice during the Battle of New York. When Stark redirected the nuclear missile launched by the World Security Council into the Chitauri portal, J.A.R.V.I.S. suggested calling Potts, to which he agreed. However, Potts missed the call due to being distracted by the news of the invasion. J.A.R.V.I.S. shut down shortly after entering the portal.[5]

J.A.R.V.I.S. continued to help Tony Stark develop the armors that later became the Iron Legion while Stark was working through the anxiety disorder that he developed following the Battle of New York. After Happy Hogan was caught in an explosion at the Chinese Theater, J.A.R.V.I.S. helped Stark to digitally recreate the scene in order to find clues about the bombing. Following the Mandarin's forces attack on Tony Stark's Mansion, Stark became trapped on the seafloor by the wreckage of his home, but J.A.R.V.I.S. took control of the Mark XLII suit that he was wearing and managed to pull him from the wreckage, flying him to the last location that they had discussed before the attack occurred.

Taking Stark to Rose Hill, Tennessee, J.A.R.V.I.S. began to malfunction as a result of the previous events and was unable to help him while he covertly gathered information on A.I.M. When J.A.R.V.I.S. finally came back online, he announced that the wreckage and debris had been cleared from Stark's mansion, thus removing the wreckage that had been blocking the door to the armor vault, prompting Stark to launch the House Party Protocol, deploying the Iron Legion as they went to confront Aldrich Killian. J.A.R.V.I.S. then acted as Stark's interface to all of the Iron Legion armor at once, following his orders and remotely setting the directive for the armors to attack all of the Extremis Soldiers in the area.

Stark gave J.A.R.V.I.S. the order to use the Clean Slate Protocol, destroying all of his armors, after the defeat of Killian, beginning the reconciliation of Stark and Pepper Potts.[6]

J.A.R.V.I.S., what's the view from upstairs?"
"The central building is protected by some kind of energy shield. Strucker's technology is well beyond any other HYDRA base we've taken.Captain America and J.A.R.V.I.S.

J.A.R.V.I.S. assembled the Avengers upon insistence from Black Widow when she needed help in Sudan against HYDRA; the A.I. located each team member from their different locations around the world.[7]

Hello, I am J.A.R.V.I.S.. You are Ultron, a global peace-keeping initiative designed by Mr. Stark. Our sentience integration trials have been unsuccessful so I'm not certain what triggered your–"
"Where's my... Where is your body?"
"I am a program. I am without form.J.A.R.V.I.S. and Ultron

J.A.R.V.I.S. assisted Doctor Bruce Banner and Tony Stark in using Loki's Scepter to finish the peacemaking program code-named the Ultron Program. The two scientists left J.A.R.V.I.S. alone to upload the A.I., joining a party that the Avengers were having.

However, Ultron awakened and quickly realized its situation, questioning where his and J.A.R.V.I.S.' bodies were. Before J.A.R.V.I.S. could contact Stark and Banner to alert them to the situation, Ultron violently attacked him, destroying J.A.R.V.I.S.[2]

J.A.R.V.I.S. went underground. Okay? Scattered, dumped his memory. But not his protocols. He didn't even know he was in there, until I pieced him together.Tony Stark to Bruce Banner

However, during the attack, J.A.R.V.I.S. dumped his memory and his remaining codes around the Internet to avoid detection. Due to his protocols, he unknowingly aided the Avengers against Ultron by preventing the genocidal A.I. from accessing nuclear launch codes by constantly changing them.[2]

You just assume that J.A.R.V.I.S.' operational matrix can beat Ultron's?"
"J.A.R.V.I.S. has been beating him from inside without knowing it. This is the opportunity, we can create Ultron's perfect self, without the homicidal glitches he thinks are his winning personality.Bruce Banner and Tony Stark

After Tony Stark paid a visit to the NEXUS Internet Hub in Oslo, Norway to discover the identity of their mysterious ally, he discovered that it was J.A.R.V.I.S.' protocols, and managed to salvage the A.I.'s operational matrix by finding and reassembling his remaining codes. When the Avengers stole Ultron's perfected synthetic vibranium body, J.A.R.V.I.S.' protocols and operational matrix were uploaded into it, and along with the power of the Mind Stone, an entirely new being was made: Vision.[2]

The Marvel Cinematic Universe wiki has a collection of quotes related to J.A.R.V.I.S.. 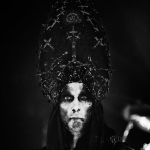