The Mark XXXVI Armor (codenamed Peacemaker) was Tony Stark's thirty-sixth Iron Man suit and was specialized to handle situations requiring crowd control. It was a part of the Iron Legion. It was destroyed by the Clean Slate Protocol issued by Tony Stark.

The Peacemaker armor was made to quell riots. Its design is based on the Mark XXXV, only having the difference of claws and being painted the color red.

Peacemaker armor before the battle at the Roxxon Norco 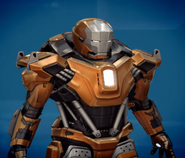 Retrieved from "https://marvelcinematicuniverse.fandom.com/wiki/Iron_Man_Armor:_Mark_XXXVI?oldid=1088991"
Community content is available under CC-BY-SA unless otherwise noted.