Destroyed by the Clean Slate Protocol

The Mark XXVII Armor (codenamed Disco) was Tony Stark's twenty-seventh Iron Man suit and was specialized in stealth capabilities, utilizing a special cloaking system.  It was a part of the Iron Legion. It was destroyed by the Clean Slate Protocol activated by Tony Stark.

The suit earned its name "Disco" because of its colorful orange and blue color scheme that enables it to use a special kind of stealth and makes it look somewhat similar to a real chameleon, as well as a disco ball from which the suit's specialty and name are derived. The suit has average weapon systems. 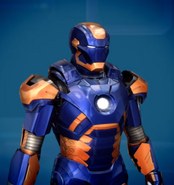 Disco Armor at the Iron Man 3 - The Official Game 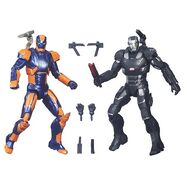 Retrieved from "https://marvelcinematicuniverse.fandom.com/wiki/Iron_Man_Armor:_Mark_XXVII?oldid=1088980"
Community content is available under CC-BY-SA unless otherwise noted.