The Mark XXVI Armor (codenamed Gamma) was Tony Stark's twenty-sixth Iron Man suit and was an upgraded version of the Mark XXV, created for construction. It was a part of the Iron Legion. It was destroyed by the Clean Slate Protocol activated by Tony Stark.

The Gamma Armor can use its jackhammers as devastating weapons along with its fundamental repulsors. It is used for being able to withstand extreme heat and temperatures as well as very powerful and devastating electrical surges. This specially built armor is also known to be resistant to Gamma Radiation, from whence it gets its name. 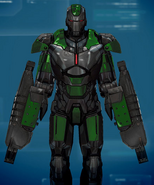 From Iron Man 3 - The Official Game