The Mark XIV Iron Man Armor was Tony Stark's fourteenth Iron Man suit and the seventh suit created after the Battle of New York. The Mark XIV was one of the first in a series of Iron Man suits created during a period of rapid development that led to the creation of the Iron Legion. It was destroyed when the Clean Slate Protocol was activated by Tony Stark.

The Mark XIV saw further reduction in weight for the sake of speed enhancement. The suit sacrifices firepower in order to do so, carrying only repulsers and shoulder missile pods as weapons. 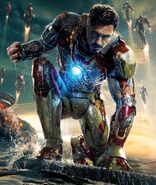