"You are running out of both time and options. Unfortunately, the device that’s keeping you alive is also killing you."
―J.A.R.V.I.S. to Tony Stark

Iron Man 2 is a 2010 superhero film, based on the Marvel Comics superhero of the same name. The film is a sequel to Iron Man. It is the third film in the Marvel Cinematic Universe, and the third installment of Phase One. The film was released on April 28, 2010 internationally and on May 7, 2010 in the United States.

With the world now aware that he is Iron Man, billionaire inventor Tony Stark faces pressure from all sides to share his technology with the military. He is reluctant to divulge the secrets of his armored suit, fearing the information will fall into the wrong hands. With Pepper Potts and "Rhodey" Rhodes by his side, Tony must forge new alliances and confront a powerful new enemy.

In Russia, the national media is televising the news conference in which Tony Stark revealed his identity as Iron Man to the world. During this, a sick Anton Vanko dies in the arms of his son, Ivan Vanko, telling him that the only thing he has left to leave him is his knowledge, which turn out to be blueprints for the Arc Reactor. He also tells his son that he has every right to the success that Tony Stark and his family has gained, which motivates Ivan to seek revenge on Stark.

Six months later, Stark continues to use the Iron Man suit to protect people and his fame has increased. He reopens the Stark Expo to fulfill his father's dream of endorsing inventors and inventions that will one day benefit the world. As Stark leaves the stage, he notices that his blood toxicity is rising, accompanied by noticeable, damaged veins around his chest, expanding outward. He keeps this secret from everyone.

After being summoned to attend a Senate Armed Forces Committee hearing on the existence and threat of the Iron Man armor, and similar suits being developed in retaliation, Senator Stern demands that he hands his armor technology over for military application. Stark, however, refuses as he says that the Iron Man suit and Tony Stark is the same concept and to give it over would be to turn over himself. He then proves that other attempts by foreign powers to duplicate the Iron Man suit have failed miserably and also embarrasses corporate rival Justin Hammer, who had testified against him, by showing he had also made a bungled attempted at creating a prototype. Stark then returns home, where J.A.R.V.I.S. confirms that the toxic levels of his blood have risen; the palladium that is powering the Arc Reactor keeping the shrapnel from reaching his heart is slowly killing him and there are no other suitable replacements.

Later, Stark, thinking he will die, makes Pepper Potts CEO of Stark Industries and makes Natalie Rushman his new assistant. At the Monaco Grand Prix, Stark takes out the Formula One driver who is representing Stark Industries and drives it himself, seeking some enjoyment before he dies, despite putting himself in immediate danger. Unbeknownst to anyone else, Vanko, or Whiplash has gained a pass to the Monaco Grand Prix through the means of his associate, plotting an attack on Stark, using his modified harness with electric whips.

Vanko soon appears on the race track and attacks the racing cars, knowing Stark would come. Stark puts on the portable Mark V suit and, with the aid of Happy Hogan, defeats Vanko. Stark discovers that Ivan is the son of disgraced Russian physicist Anton Vanko, who collaborated on the first Arc Reactor with Stark's father Howard Stark. Vanko is later broken out of jail by Justin Hammer who recruits him to help make his own Iron Man suits and gain revenge on Stark by tarnishing his name and image.

Stark throws what he believes will be his last birthday party and promptly proceeds to get drunk while wearing the Mark IV armor. When Stark begins to endanger his party guests by blasting objects out of the air in their vicinity, his friend Lt. Colonel James Rhodes dons the Mark II armor to subdue him. The next day Stark, disgraced and hungover, is approached by Nick Fury of S.H.I.E.L.D. and Rushman - who in reality is Natasha Romanoff, who provides him with a box of his father's old research that can hopefully be used to find a cure for his palladium poisoning.

Using his father's research, Stark discovers a message from his father that leads him to examine the original 1974 diorama of the Stark Expo: in reality, a disguised diagram for the molecular structure of a new element. Stark hand-builds a Particle Accelerator with the aid of his computer AI J.A.R.V.I.S. and synthesizes this new element, creating a new, perfected Arc Reactor that cures his palladium poisoning. Realizing Hammer's involvement with Vanko, Stark races to the Stark Expo.

At the Stark Expo, Justin Hammer unveils his new military drones, captained by Rhodes in a heavily-weaponized version of the confiscated Mark II armor. Unfortunately, it is soon discovered that Vanko has complete control of both the drones and Rhodes's new armor, and Stark arrives just as they go on the attack. Hammer's attempts to regain control of the drones get him placed into NYPD custody. As Stark battles against these remote-controlled enemies, Happy Hogan and Romanoff race to Hammer's Hammer Industries Headquarters to stop Vanko.

By the time they arrive, Vanko has already departed for the Expo in a new, more powerful suit of armor, but Romanoff is able to give Rhodes control of his armor again so that he and Stark can fight Vanko together. The two armored allies combine their powers and successfully take Vanko down, but Vanko's armor and the Hammer Drones are revealed to have been equipped to self-destruct. As they begin to detonate, Stark races to save Potts, flying her to a rooftop where they reconcile and kiss.

At a debriefing, Fury informs Stark that while Stark is "unsuitable" for the Avengers Initiative, S.H.I.E.L.D. wants him as a consultant. Stark agrees on the condition that Senator Stern present him and Rhodes with their medals for bravery. Meanwhile, S.H.I.E.L.D. agent Phil Coulson is seen driving to a remote impact crater in the New Mexico desert. Over a phone, he informs Fury that they've found "it", which is revealed to be a mysterious hammer. 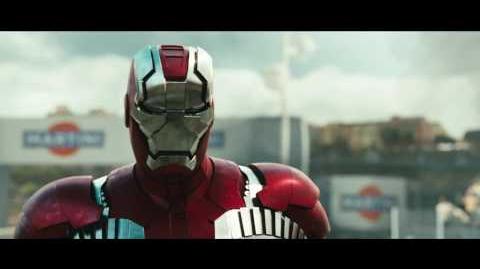 The Marvel Cinematic Universe Wiki has a collection of images and media related to Iron Man 2.