The Birth of Iron Cross

Once the HYDRA scientist Arnim Zola was free to begin tinkering with the power of the Tesseract, he began to think on how to improve the standard main battle tank. Attempting to rectify the mobility problems of the heavy vehicles, he envisioned a massive mechanical suit to serve a similar purpose. Because the recoil of standard ballistic weaponry would throw off the accuracy of his new mech suit, Arnim Zola created a massive sonic cannon and mounted it on the suit's shoulder, allowing the Man-Propelled Tank to stun and cause panic in the ranks of the enemy, before closing in with a custom-designed ballistic-shield to engage and crush the debilitated foes in close range. Upon the selection of Helmut Gruler as the pilot, the massive HYDRA enforcer Iron Cross was born.[1]

Arriving at the castle of Baron Heinrich Zemo in 1944, Iron Cross surprised Captain America by ambushing the battle-weary and bruised Super Soldier after his battle with Baron Wolfgang von Strucker. While Iron Cross' attack would have killed a normal man, Rogers survived, though he blacked out, allowing HYDRA to capture him and the rest of the Howling Commandos, as well as obtain medical attention for Strucker. Iron Cross held Rogers still as he was escorted alongside Madame Hydra and Zola through the dungeon complex, before he left the Captain in Madame Hydra's care, being needed elsewhere.

Captain America and Iron Cross would cross paths once again when he attacked Rogers in defense of the Red Skull, who was trying to use the Tesseract to awaken the Sleeper. Prepared for the battle this time, Rogers was able to redirect the blasts of Iron Cross' cannon back at him, stunning the suit long enough to make it vulnerable. While Rogers was nowhere near as strong as the mechanical suited warrior, who could do a massive amounts of damage with each strike, he was able to use his superior mobility to keep out of Iron Cross' attack radius and keep needling him. Eventually, the Red Skull himself intervened, firing his grenade launcher into the battlefield, but these grenades could do as much damage to Cross as they could to the Captain, and eventually Iron Cross' suit completely shut down. As Red Skull retreated, the Tesseract in-hand and the Sleeper apparently awakening, Rogers threw himself at the Skull by using Iron Cross as a ramp, though the effort was in vain, and the Sleeper's attack knocked Rogers away, allowing the Red Skull time to escape.[1]

Helmut Gruler is equiped with the Iron Cross Armor. 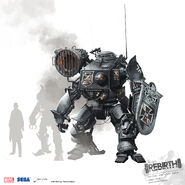 Concept Art
Add a photo to this gallery

Retrieved from "https://marvelcinematicuniverse.fandom.com/wiki/Iron_Cross?oldid=1227638"
Community content is available under CC-BY-SA unless otherwise noted.