"Greetings, recruit! The laws of nature are changing. In this simulation, you have emerged from your cocoon reborn as an Inhuman. It's time we find out how well you adapt. S.H.I.E.L.D. has dispatched a team to rescue you, but HYDRA is also in pursuit."
―Luke Mitchell[src]

Inhuman Adaptation Challenge is the fourth episode of the web series Agents of S.H.I.E.L.D.: Academy.

Ralph Lammie, Jr. is dropped off at an area where he finds a monitor, on which he is greeted by Luke Mitchell. Mitchell presents him with a scenario in which he has been reborn as an Inhuman and must use his abilities to adapt to a situation. He informs Lammie that S.H.I.E.L.D. has dispatched a team to help him but HYDRA is also in pursuit, and that he must complete an obstacle course and retrieve some coordinates to an extraction point, all within six minutes.

Lammie begins with a physical climb to test his physical stamina. Upon completing the climb, he then has to cross a cable 35 ft in the air using only some ropes for balance. Next, Lammie must cross a 40 ft balance beam. Finally, he needs to climb a 30 ft pole and jump to reach the coordinates, which are suspended in the air. He fails the first attempt at the jump, but succeeds on the second with only a moment to spare.

As Lammie is being driven to the extraction point, he receives a video message from Brett Dalton. Dalton alerts him to a car in pursuit, and informs him that he will have to beat his HYDRA team to the finish line while answering trivia questions:

For the first question, Lammie guesses that it was a cannon, but the correct answer is a Splinter Bomb. For the second, he answers Jemma Simmons, which is correct, which Dalton dismisses as being "too easy". For the third, he does not know the answer, and Dalton is in disbelief that he does not know it to be John Garrett, asking "who doesn't love Bill Paxton?" For the fourth, Lammie once again doesn't know, the answer being Daniel Whitehall. For the fifth, he confidently answers that it was the Red Skull. For the final question, he answers that he was a senator. Dalton commends Lammie for winning, and advises him to give HYDRA a call when he grows bored with S.H.I.E.L.D.

Mitchell congratulates Lammie for completing the challenge and informs him that he will now play an agent on Agents of S.H.I.E.L.D.. Lammie excitedly celebrates his victory. 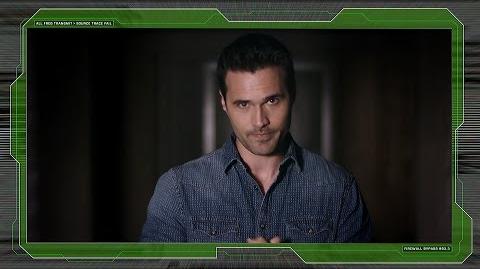 Retrieved from "https://marvelcinematicuniverse.fandom.com/wiki/Inhuman_Adaptation_Challenge?oldid=951506"
Community content is available under CC-BY-SA unless otherwise noted.