Agents of S.H.I.E.L.D.
Agent Carter
The Falcon and The Winter Soldier (picture)
What If...?

The Howling Commandos were an elite combat unit that had been led by Captain America during World War II. At the end of the war and Captain America's apparent demise, their unit continued to be active and was led by Dum Dum Dugan. The team was given its name by Junior Juniper, one of their members who was killed in the line of duty.

The Howling Commandos were formed during World War II out from various P.O.W.s after they were rescued, along with 394 other soldiers that were held prisoners at the Austrian HYDRA Weapons Facility, by Captain America, who infiltrated the base after learning that the 107th was held captive there. The unit consist of fighters from the United States Armed Forces' 107th Infantry Regiment, the British Military, and the French Resistance.[1]

"I know this sorry excuse for a unit is called the 'Howling Commandos,' but do you mugs have to keep your gums flapping 24-7?"
―Dum Dum Dugan[src]

The new unit, led by Rogers and Bucky Barnes, traveled around Western Europe to eliminate every HYDRA base they could find. Their operations were some of the most successful of the entire war. The Howling Commandos were responsible for the capture of Arnim Zola during a raid on a train in the Alps. It was on this mission that Bucky Barnes was lost and presumed dead.

They also participated in attacking Johann Schmidt's last base along with other U.S. forces led by Colonel Chester Phillips. The battle was eventually won. However, despite Schmidt's apparent death and foiled plans, Captain America was missing in action after crashing Schmidt's plane to save the mainland United States.[1]

After Captain America was lost over the Arctic Ocean, the Howling Commandos assisted the Seventh Army during Operation Undertone.[2]

Dum Dum Dugan and Jim Morita were sent to Austria with Strategic Scientific Reserve agent Peggy Carter to take possession of artifacts at the last known HYDRA Facility located there. They captured HYDRA General Werner Reinhardt, his troops and an Obelisk classified as an 0-8-4.[3]

On V-E Day, the Commandos assembled in London and mourned the loss of Captain America.[1]

"You guys are the Howling Commandos."
"Yeah, I hate that name."
―Rick Ramirez and Happy Sam Sawyer[src]

Following World War II the Commandos served as a tactical team for the 107th Infantry Regiment. Some members eventually leaving the unit but new recruits came.[4] In 1946, the Howling Commandos were called by Peggy Carter to help her, SSR agent Jack Thompson, and his team in infiltrating a Leviathan base camp in Byelorussia. They met Carter and the team and escorted them to Belarus. Infiltrating the facility, they discovered various methods of dispensing subliminal messages. They encountered a little girl supposedly left behind, and Dum Dum Dugan went to comfort her, only to be non-fatally stabbed by the girl, who quickly shot and killed Junior Juniper before escaping.

Going deeper into the facility, the team found the scientists Nikola and Ivchenko. Freeing them, they ran into an ambush where Nikola tried to use Happy Sam Sawyer as a hostage. Ivchenko killed Nikola, allowing the Commandos and Carter's team to escape.

The Howling Commandos said goodbye to Carter and her team, and Dugan told Carter that she was an honorary Commando, giving her the nickname "Miss Union Jack." He also gave Ivchenko his bottle of bourbon.[5]

"Barnes is the only Howling Commando to give his life in service of his country."
―Smithsonian Narrator[src]

The Smithsonian Institution in Washington, D.C. created an exhibit which featured Captain America with the original Howling Commandos.[2] In 2014, Bucky Barnes went to see the display, which reminded him of his past.[6]

Antoine Triplett's mother allowed her son to have a suitcase filled with many of the gadgets that the Howling Commandos used over the years, so that Coulson's Team could take down the Centipede Project.[7] 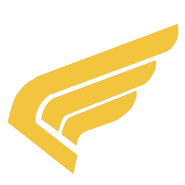 The insignia used by the Howling Commandos on their uniform.

The Marvel Cinematic Universe Wiki has a collection of images and media related to Howling Commandos.