Howard Stark created a vault in the basement of his mansion after he returned, distressed, from the German front in Finow.[1]

Leet Brannis was tasked by Leviathan to infiltrate the mansion and steal all the technology that was kept inside his vault, deemed too dangerous by Howard Stark to ever be used.[2]

Brannis waited until a night with a powerful thunderstorm. It caused a power failure for two hours that deactivated all the alarms and he opened a hole under the vault from the sewers. Since the sewers were prepared to take storm water to the river, Brannis put a raft under the vault and took all the technology to the sea, while opening a manhole in the opposite direction as a distraction.

Brannis followed the course of the waters until reaching a tide gate, and loaded the technology to a ship named The Heartbreak.[3]

Howard Stark noticed that the theft had occurred when he returned from a trip to Monaco.[2]

Peggy Carter traveled to Howard Stark's Mansion in order to investigate the vault that Leet Brannis was able to raid, stealing the dangerous inventions that Stark kept there.

Edwin Jarvis, who was still inside his private residence, was about to clear the table when his wife Ana told him to leave it, as she would take care of it. Jarvis noticed Carter outside the house; he accepted Ana's offer so that he could attend to Carter, telling Ana that he would be outside in the garden.

Jarvis told Carter she should have called him before entering the estate, but Carter guessed that women wandering through the property was surely something usual, something that Jarvis acknowledged.

Carter explained that her landlady helped to continue their investigation, because if they discover how Leet Brannis was able to break into Stark's seemingly impenetrable vault, maybe they could trace where he went from there, locating all the missing technology in the process. Jarvis noticed that Carter was not adequately dressed for that mission, given that the thief escaped through the sewers under the mansion.

Carter inquired about the night of the theft; Jarvis said that he did not notice anything unusual, given that a thunderstorm caused a power failure during two hours, and the combination of candlelight and rain made Jarvis quickly fall asleep.

Their conversation was interrupted by Agents Jack Thompson and Daniel Sousa of the Strategic Scientific Reserve, who had discovered the license plate of the car that Jarvis and Carter used to go to the Roxxon Refinery the night it was destroyed and wanted to take Jarvis for questioning.

Jarvis attended to the two agents while Carter hid behind the door. Jarvis explained that Howard Stark was "indefinitely unavailable," though Thompson revealed that they were not looking for Stark; they came to speak to Jarvis himself, as they had found the bumper of one of Stark's cars usually driven by Jarvis.

Jarvis explained how he reported that the car had been stolen several days ago, pointing them to Detective Davis from the 19th Precinct in order to inquire more about the theft, and tried to dismiss the two agents.

Thompson blocked the door with his foot in order to further question Jarvis, given that the bumper of the car was found in a major crime scene. Thompson threatened to call a judge and obtain a warrant; Jarvis agreed on accompanying the two agents to maintain Carter's cover, even joking about going in the back of a car for the first time in years.[3]

Descent to the Sewers

Peggy Carter returned to Howard Stark's Mansion at night, in order to investigate the vault and try to guess the method that Leet Brannis used to transport all the technology kept inside.

Edwin Jarvis received Carter, who asked him if he wanted to clarify some of the facts that were presented during his interrogation by the Strategic Scientific Reserve; Jarvis refused. Seemingly accepting the excuse, Carter prompted him to investigate the vault.

Carter whistled to check the depth of the hole, and decided to descend using climbing equipment. Jarvis' skills with the equipment made Carter realize it was not the first time he had done something similar, and he confessed that he had visited the Himalayas before World War II, and descended to the sewers below with her.[3]

Development of the Arc Reactor

"This Arc Reactor technology, the implications alone of such a device even existing, have you not thought about these things?"
"They said the same thing about the Manhattan Project, didn't they, Maria? 'Where ignorance is bliss...'"
"'...'tis folly to be wise'."

In the 1960s, Howard Stark had a meeting with Anton Vanko over lunch, in presence of Maria Stark and Vanko's wife, in the mansion's patio regarding what they called "The Unity Project", focusing in developing the Arc Reactor technology. Stark hoped to change the future of humanity with this technology, while also bridging the gap between the United States of America and Soviet Union. However, Vanko wanted to use their research to make money.[4]

In 1970,[5] Howard Stark fathered a son, Tony, living together with him, his wife Maria and their trusted butler Edwin Jarvis in the mansion. Howard was very strict with Tony growing up; one example particularly remembered by Tony years later was an occasion in which he accidentally ran his toy car over his father's foot. Howard scolded Tony in his study for spending his weekends playing at home. Tony started to hate returning home from boarding school, despite Jarvis' warm welcomes and efforts to comfort him.

Tony grew up to become a rebel teenager, who was lectured by his father for his attitude and immaturity despite his intelligence. After his graduation, a 17-year-old Tony was lounging in the family pool whilst Howard expressed his hope that one day he would be able to tell his son about his real work. However, he was called away by Jarvis to meet Maria at the car for their trip.[4]

On December 16, 1991, Tony returned home for Christmas break from studying abroad. While Maria played "Try to Remember" on the piano, Tony was woken up from a nap on the couch as his parents prepared to leave for the Bahamas on vacation, with Howard mentioning that they needed to make a stop at the Pentagon. Maria encouraged Tony to say goodbye to his father, to which the pair had a mocking discussion on his playboy antics. As Howard retrieved their luggage, Maria tried to assure Tony that his father did miss him when he was away from home, but Tony remained stubborn. Maria then gave her son a kiss goodbye before she and Howard left.

This was unfortunately the last time the Starks were together, before Howard and Maria were killed in a car accident.[6]

As an adult, Tony Stark created the A.I. J.A.R.V.I.S. as an homage to his faithful butler, and installed it in the mansion as what he called a force of habit, to feel the presence of Edwin Jarvis in the mansion once again.

It was during one of the nostalgic visits to his childhood home as he explored his father's study that Stark received a petition from the United States Armed Forces to return to Afghanistan as Iron Man to clean a Land mine-infested desert.[4]

Howard Stark housed his most dangerous inventions in a vault under the mansion, such as: 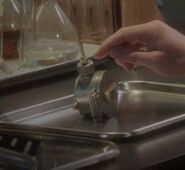 The Marvel Cinematic Universe Wiki has a collection of images and media related to Howard Stark's Mansion.