Heavy is the Head

Heavy is the Head

"Coulson has a lot on his plate, rebuilding S.H.I.E.L.D."
"I wouldn't know. He's not exactly the sharing type these days."
"He has the world to worry about, not just us, not just the team."
―Melinda May and Skye

Heavy is the Head is the second episode of the second season of the television series Agents of S.H.I.E.L.D..

Hunted and running out of solutions, Phil Coulson puts his team right in the line of fire in the hopes of saving them all. But with General Glenn Talbot, HYDRA, and Carl Creel all on the attack, can they possibly survive? Meanwhile, a mysterious Doctor harbors some dangerous secrets that could destroy one of our core team members.

Escaping the Government Storage Warehouse on a motorcycle, Melinda May finds the flipped SUV of Idaho, Isabelle Hartley, and Lance Hunter. Only Hunter is alive as he tells May to pursue the Absorbing Man while he uses the Mouse Hole to free himself. Upon release, he is surrounded by the United States Armed Forces.

Meanwhile, May is ordered not to engage Creel, so she tracks him to a restaurant. In the restaurant, Creel is accidentally touched by a waitress and she turns to stone as May watches while Creel escapes.

At the Playground, Skye and Antoine Triplett deliver the Quinjet and learn of the deaths of Hartley and Idaho. As Alphonso Mackenzie looks over the jet's cloaking technology so it can be duplicated for the Bus, Leo Fitz begins to feel jealous.

Hunter is collected by Glenn Talbot and is asked to betray Phil Coulson because there is a senator who wants his arrest. Hunter wants Hartley to have an honorable funeral, citing that since S.H.I.E.L.D. is labeled a terrorist organization, she is a labeled terrorist and will get a pauper's grave. Hunter tells Talbot that for a proper burial for Hartley and two million dollars, he will give him Coulson in two days.

When Hunter returns to the Playground, Coulson already knows that Hunter has talked to Talbot. He sends Skye to pack the deceased's possessions. Hunter and Skye talk.

Fitz finds the DNA file on the Absorbing Man and decides that he will help in his capture.

While the field agents talk to their director, Raina contacts Coulson. The night before, Creel stole from her a ring that helped against the adverse effects the Obelisk was having on him; unbeknownst to him, the ring had a tracking device.

When Creel goes to meet Sunil Bakshi in a public park to deliver the Obelisk, he is fired upon by Hunter, who incapacitated the other field agents with an I.C.E.R.. During the commotion the gunfire caused, Raina takes the briefcase containing the artifact. As Hunter and Creel battle, Coulson uses the Overkill Device to destabilize and neutralize the Absorbing Man.

Later, Skye and May discuss Coulson's attitude. May confronts Coulson and convinces him to release the Words of Creation. He does in a blackened room as May documents the incident.

Raina delivers the Obelisk to Calvin Zabo, who shows her that she can touch it without dying.

Coulson delivers the Absorbing Man to Talbot while a cloaked Bus and Quinjet keep Coulson from being captured. 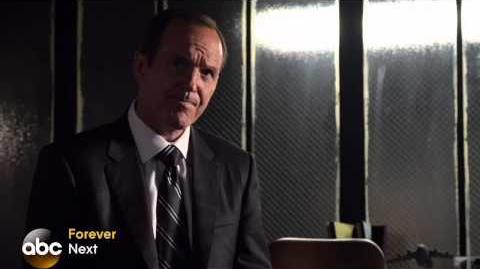 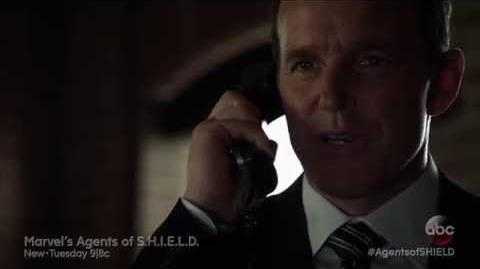 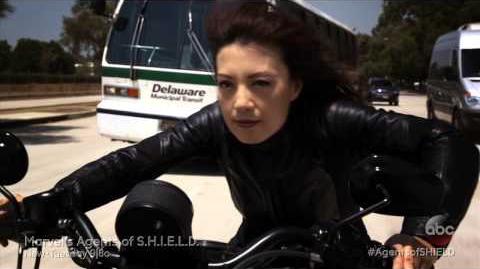 The Marvel Cinematic Universe Wiki has a collection of images and media related to Heavy is the Head.