Hayley is an attendent of a small shop in Central Park whom quickly became a victim of Billy Russo's brutality.

"They're bleeding out. Remind me how it goes again. Ticktock, ticktock, right? Guess two more kids are gonna die for you."
―Billy Russo to Frank Castle[src]

Hayley and Carl were closing a stand and were prepared to engage in romantic affairs when they were approached by Billy Russo behind the corner. They were beaten and bloodied before they were gagged and roped to the horses on the carousel. During the duel between Russo and Castle, she and Carl cried and were, soon, threatened to beg for Castle's rescue. Eventually, the couple were freed and awaited the arrival of police.[1] Carl and Hayley were questioned about the incident by Brett Mahoney and they told him about Castle.[2] 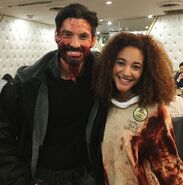 Retrieved from "https://marvelcinematicuniverse.fandom.com/wiki/Hayley?oldid=1158370"
Community content is available under CC-BY-SA unless otherwise noted.