"Okay. The mechs went into a system reset and sent a distress signal out. We traced it to a location in the Appalachian Mountains, and after some satellite imaging, we can confirm that this is Hale's base."
"It's a decommissioned military bunker, which means it's highly secure and way off the grid."
―Quake and Melinda May[src]

The HYDRA Preparatory Academy was a boarding school built in a decommissioned United States Army bunker located in the Appalachian Mountains where members of HYDRA sent their children to be indoctrinated in the ways and ideology of the organization, and to prepare for their future roles serving HYDRA's plans.

Following the Destruction of HYDRA and the fall of its hierarchy, Hale used it as her personal base, seizing command while protecting her daughter Ruby Hale, who was one of the students at the time.

Built in a decommissioned United States Army facility, the HYDRA Preparatory Academy was a school for the children of HYDRA operatives. Hale went to school there, along with Wolfgang von Strucker and Jasper Sitwell. Each student was given a pet dog to look after throughout their stay in the Academy, and one of the final tests for graduation involved killing this dog to show complete commitment to the HYDRA cause an absence of emotional weakness.

Before Hale and her fellow students graduated, they attended a lecture given by Daniel Whitehall, who presented the Project Destroyer of Worlds and its Particle Infusion Chamber. Whitehall asked the students for ideas about the materials they could use for the Chamber: while von Strucker suggested using the Tesseract, Hale rejected the idea, claiming that they could never reclaim it without sabotaging the ongoing S.H.I.E.L.D. infiltration and instead suggested to look for new materials in outer space, much to Whitehall's satisfaction.

Later that day, while the students were physically training, Hale was a victim of a malicious prank orchestrated by von Strucker and his friends. Infuriated, Hale attacked von Strucker and punched him in the face several times before being stopped by other students.

As other students received their future affectation, Hale was worried that she still got no results, fearing that her fight with von Strucker could endanger her career. However, Hale was called by Whitehall, who explained his plans for her. While von Strucker would be working on the engineering of the Particle Infusion Chamber, Hale would be artificially inseminated so that she would give birth to the one using the Chamber and leading HYDRA in the future.

Years later, Ruby Hale also attended classes at the HYDRA Academy. However, while Hale and Ruby were sharing a meal, Hale got called by Fischer, who informed her of the ongoing Destruction of HYDRA at the hands of Glenn Talbot. Following Fischer's suicide, Hale returned to the HYDRA Academy, where she found Ruby arguing with Steger, a teacher at the Academy. Indeed, Ruby refused to kill her pet dog as part of a test, calling it an old-fashioned and futile tradition, and even more since HYDRA was perishing. As Steger got angry and grabbed Ruby by the arm, Hale shot him and declared to Ruby that they were all that was left.[1]

HYDRA Prison and Base

"I see they've shown you to your new accommodations."
"Of all the blindfolds I've forcibly worn, that was one of the nicest."
―Hale and Phil Coulson[src]

Following the Destruction of HYDRA which forced the remaining members of the organization to be more secretive than ever, Hale took possession of the HYDRA Preparatory Academy and turned it into her base of operations for a new version of HYDRA. She gathered several HYDRA operatives, including Ruby Hale, in the former Academy, and also arranged for Glenn Talbot to be transferred into the Academy so Hale could watch him and keep him prisoner.

Once Talbot woke up in the Academy, Hale told him about her contacts with the extraterrestrial Confederacy and her plan to retrieve the Particle Infusion Chamber, although Talbot refused to assist her in this endeavor, prompting Hale to imprison him again.[1] During his imprisonment in the Academy, Talbot was also subjected to the Faustus method.[2]

Hale also decided to take Werner von Strucker, who was undergoing therapy following his numerous traumas, to the HYDRA Preparatory Academy. Unlike Talbot, von Strucker was left free to move inside the Academy. He encountered Ruby, and although she remained silent the first time he attempted to speak with her, he managed to engage conversation with her, stating he did remember her from a play date years ago. As von Strucker took Ruby hostage in order to get answers, Hale intervened and explained that she had great plans for both von Strucker and Ruby, but that she needed von Strucker's knowledge about the Particle Infusion Chamber to fulfill them.

At first, von Strucker refused to help Hale and returned in his room, where he experienced nightmares. He was visited by Ruby, who revealed that she did not want to blindly obey her mother and suggested that von Strucker and herself should form a team of their own. Ruby then took von Strucker to the Academy's physical training room, where von Strucker met Carl Creel, who had also been taken to the Academy by Hale. As von Strucker and Creel discussed, Hale congratulated her daughter upon having convinced the former to work with them.[4]

Later, Phil Coulson was also imprisoned in the HYDRA Preparatory Academy under Hale's orders. Coulson encountered Ruby, who remained silent as she had done with von Strucker, and returned to his room. Hale visited him and announced her plan: to bring HYDRA and S.H.I.E.L.D. to work together and unite against a common enemy. She took Coulson to the Phase Harmonic Teleportation Device so he could meet Qovas. Following the interview, Hale revealed that she wanted to alter the deal Qovas had brokered with Earth. To that end, she suggested to have Johnson be infused with the Gravitonium and become the Destroyer of Worlds. However, Coulson tried to advise her against it for he had seen the consequences of this plan. As a result, Hale ordered Coulson to be imprisoned once again.

Coulson was visited by Ruby, who thought that she was the real Destroyer of Worlds. As Coulson refused to give her Johnson's whereabouts, Ruby revealed that Talbot was in HYDRA's custody, which had turned him into a broken man.[1]

While Coulson remained prisoner, Hale decided to experiment with the Gravitonium she had secured from the Principia. She instructed Creel to touch the element, which turned out to be incredibly traumatic and painful for him, forcing him to take some rest in his room. Meanwhile, Ruby visited von Strucker and voiced her concerns over the fact that hale might choose someone else to become the Destroyer of Worlds. Von Strucker comforted Ruby, claiming that he would find the Particle Infusion Chamber for her only.

As Creel began hearing voices in his mind which mentioned Coulson's name, Creel ran to Coulson's cell and assaulted him. However, upon learning that Talbot was a prisoner in the Academy, Creel agreed to help Coulson to escape with the General.

Although Creel had a hard time with the voices arguing in his head and Coulson was nearly killed by a Sleeper Mech, both Coulson and Talbot escaped with the Phase Harmonic Teleportation Device while Creel remained behind to fight against Ruby. However, Hale intervened and ordered her daughter to stand down. While Creel was taken back into his cell, Hale ordered Ruby to chase Coulson and Talbot.[5]

Nevertheless, Ruby and Hale failed to recapture Coulson and Talbot. They returned to the Academy and Hale, who grew wary of Ruby's insolence and tendency to disobey her orders, locked up her daughter once again in her bedroom, with all Ruby's posters and personal stuff removed from it. Later, Ruby was visited by von Strucker, who informed her that he had located the Particle Infusion Chamber and urged her to go and find it. Initially, Ruby was reluctant to go against her mother's will, but she later tricked Hale and locked her up in the bedroom. Von Strucker and Ruby then left the Academy with a HYDRA QuadCopter after von Strucker killed two HYDRA scientists.[2]

Hale was eventually released by her aide Candice Lee, who noticed that the Sleeper Mechs of the HYDRA Academy had gone down. Hale and Lee discussed the case of Creel, who was growing more and more insane by the voice the point of smashing his head against the walls to make the voices he kept hearing go out of his head.

As Hale and Lee discussed the departure of Ruby and von Strucker to find the Particle Infusion Chamber, however, the Academy was attacked by Johnson and Melinda May who quickly took down several agents. Although Lee was ready to put up a fight, Hale chose to surrender and to collaborate with S.H.I.E.L.D. in an attempt to stop Ruby before she infused herself with the Gravitonium. Therefore, Hale left the Academy with Johnson and May.

Following Ruby's death at the HYDRA Herefordshire Facility, Hale returned to the Academy in distress. She then used the Phase Harmonic Teleportation Device of the Academy to reach Qovas.[6] 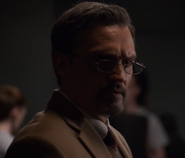 The Marvel Cinematic Universe Wiki has a collection of images and media related to HYDRA Preparatory Academy.
Community content is available under CC-BY-SA unless otherwise noted.
Advertisement