"The last time I saw that thing, it had a giant flamethrower mounted on it."
― Howard Stark[src]

The HYDRA Flamethrower is one of the advanced weapons developed and used by HYDRA during World War II, before harnessing the power of the Tesseract.

During their first actions as a special weapons division of the Nazi Schutzstaffel, the scientists of HYDRA developed several advanced weapons. However, after Johann Schmidt and Arnim Zola managed to harness the power of the Tesseract, most previous weapons were discontinued to favor the newly created cannons and assault weapons.

One of these few weapons that were still used was the HYDRA Flamethrower, which was used by many soldiers in HYDRA Headquarters when Captain America raided the base.

Later, one of these soldiers managed to slow down Captain Rogers while pursuing Johann Schmidt, but the soldier was killed when Agent Peggy Carter fired at the fuel tanks of the flamethrower, causing it to explode. They were discontinued after HYDRA's defeat at the hands of Captain America and the Strategic Scientific Reserve.[1] 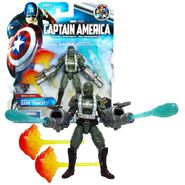