Marvel Cinematic Universe Wiki
Register
Don't have an account?
Sign In
Advertisement
in: Articles to be expanded, Organizations, HYDRA/Framework

"When no one would tell us the truth, HYDRA stepped forward. They brought us law and order, purpose. They galvanized us for the good of the state over individual interests."
―Phil Coulson[src]

HYDRA was a virtual recreation of the real-world organization of the same name inside the Framework. Much like the real-world S.H.I.E.L.D., HYDRA was based in the United States of America and had a global influence on the whole world, but did so through a tyrannic reign of terror based on hatred towards Inhumans and highly repressive policies and propaganda.

Its rule was challenged by the remnants of the S.H.I.E.L.D. resistance, and was later disrupted when real-world agents Daisy Johnson and Jemma Simmons infiltrated the Framework to release their friends trapped in it. This marked the beginning of a chain of events which eventually caused HYDRA to progressively lose control as the truth about its actions was revealed and S.H.I.E.L.D. attracted more public support. Eventually, the whole organization was deleted when Aida enacted the destruction of the Framework.

"HYDRA had a plan. I'll give them that. Scare everyone, take over the media, rewrite history. You know what's not in that book? The Trail of Tears. The Holocaust. Martin Luther King Jr."
―Alphonso Mackenzie to Jemma Simmons[src]

Using knowledge obtained from the Darkhold, Holden Radcliffe and Aida redesigned the Framework to fix one regret for each user. This had the unintended effect of creating a virtual reality where HYDRA dominated the world.[1]

As a result of May's actions, S.H.I.E.L.D. brought Katya back to the United States, where her abilities of sensory manipulation caused a massacre at a school in Cambridge, Massachusetts.

The massacre and the subsequent shutdown of S.H.I.E.L.D. led to HYDRA revealing itself to the world before conquering the United States, and eventually the entire planet, creating a fascist new world order.

Unlike its real-world counterpart, which never rose above being a mere terrorist organization, the virtual HYDRA controls the world. As such, HYDRA is divided into several divisions and subdivisions, replacing all aspects of society with their own. In the United States, HYDRA is divided into the following branches. 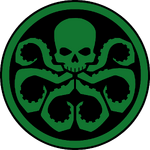 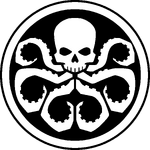 The symbol displayed on the Triskelion and operative badges. 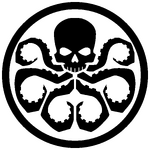 The symbol used by the security force in the Triskelion. Also used on body bags and in the HYDRA Enlightenment Cultivation Center. 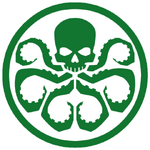